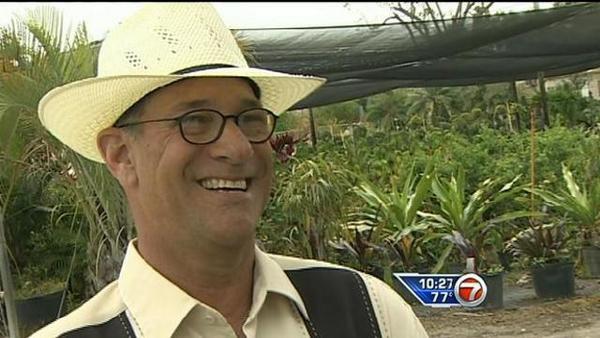 WSVN — No one ever wants to walk into a divorce court, or to be involved in a divorce.Woman: “That’s fine. If you can’t agree we will try the case.”

Just ask Jeff Klein about his involvement in a divorce.

Jeff Klein: “It comes with some comedy. I have never been a part of this before.”

Jeff can laugh because he is not getting divorced, but he got dragged into the case of Benjani Vierra vs. Klever Ontenanda, a husband and wife who owned two nurseries in Miami-Dade.

Jeff Klein: “I was asked to put a wholesale value on all the plants at two nurseries because the couple was getting divorced.”

Jeff is an arborist, who can not only tell you how to take care of your plants, but what they are worth. In this case he was asked by the husband’s attorney to determine the value of the plants at this nursery in Homestead. Jeff says he never spoke to the wife’s attorney, but…

Jeff Klein: “From the e-mails that I read, I know that both of those attorneys’ offices were in touch with each other.”

Jeff was then asked to determine the value of the Miami nursery the soon-to-be-divorced couple owned. Jeff wrote his report, put in his 49 hours, and sent his bill for $3,450 dollars. Welcome to the middle of a divorce, Jeff.

Jeff Klein: “Well, the problem is not with the husband’s attorney, as they have paid me. The problem is with the wife’s attorney and the wife, who claims I was never hired to do any of the work at all.”

Jeff Klein: “What strikes me to be odd is, I am sure the attorneys are advising this wife not to pay my bill, but it seems like they are racking up some hours on their own to advise her not to pay me. I wonder if they are working for free.”

Well, like most of us, Jeff works to pay his bills and can’t afford to get paid half price, but Howard, is he out of luck?

Howard Finkelstein: “No, he is not. If this were a business matter outside of a divorce, Jeff could have problems collecting, but the good news is that in a divorce, a judge has great latitude to order either or both parties to pay their share. So Jeff or one of the attorneys needs to ask the judge to make a decision.”

Elena Farinas: “She is receiving the income from both businesses.”

To make sure Jeff got paid by the wife’s side, Farinas went to court and got Judge Valerie Schurr to sign this order requiring the wife to pay Jeff the $1,725 dollars she owed him.

Jeff Klein: “I hear a lot of lawyer jokes.”

Jeff says a lot of the jokes are funny, but getting involved in the middle of a divorce is not.

Jeff Klein: “I wasn’t ever associated with any law situations where I was left with a bitter taste in my mouth, but I am starting to come around to that now, now that I have gone through this.”

In court we were told that the wife had sent Jeff a check for the money she still owed him. On Wednesday, Jeff got his money. Took a while, but at least he got everything he was owed out of the divorce case. Most husbands and wives wish they could say they got what they wanted out of a divorce case.

Someone planted a problem in your path? Wanna divorce yourself from it? Give us a call. We won’t marry ourselves to your headache, but we will take a vow to solve it.