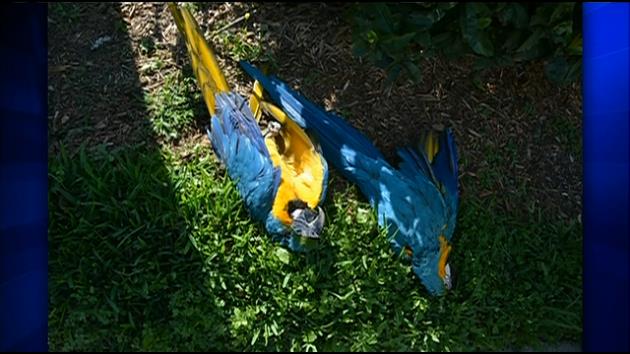 Police revisited the tree where the parrots had been known to perch, Thursday, in search of a nest that may have belonged to the dead parrots. "While we were up there we did see a pair of macaws flying around," said officer Lauren Poole. "They seemed to be parents, not happy we were around the area, so we assumed there was a nest nearby. However, [the nest] did not belong to the pair killed."

Assisting police in their search for a nest were experts from Jungle Island. Stephany Kocijancic, an expert from Jungle Island, said, "So, we’re assuming there’s a nest nearby. However, it’s not in that tree, and it’s a possibility it did not belong to the other pair that was unfortunately killed."

This area of South Florida is no stranger to parrots, as a family of about 15 macaws are known to be living near the 200 block of Grand Avenue. "I’ve been feeding them for 14 years," said bird lover, Karen Lee.

Lee considers these birds her pets and was devastated to find two macaws were shot dead, a week earlier. "I’m concerned. They’re beautiful birds," said Lee. "I love them. My kids have grown up seeing them."

According to Coral Gables Police, someone used a small caliber rifle or pellet gun to shoot the pair of parrots on March 23, at around 9:30 a.m.

Now, bird lovers in Coral Gables have raised a reward of $13,000 and are petitioning for anyone to help if they have information on who may have killed these birds.

If you have any information on the slain birds, call Miami-Dade Crime Stoppers at 305-471-TIPS. Remember, you can always remain anonymous, and you may be eligible for that $13,000 reward.