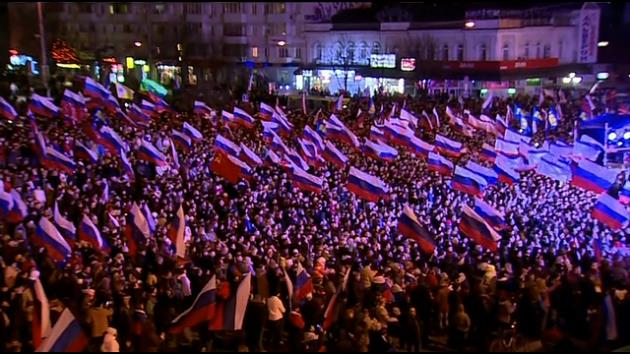 SIMFEROPOL, Ukraine (AP) — Crimea’s parliament on Monday declared the region an independent state, after its residents voted overwhelmingly to break off from Ukraine and seek to join Russia.

In a sign of rising tensions following the Sunday referendum that called for annexation to Russia, the Ukrainian parliament also approved the president’s order for a partial armed forces mobilization of up to 20,000 people and said that all Ukrainian state property on the territory of the Black Sea peninsula will be nationalized and become the property of the Crimean Republic.

The referendum is not recognized by the West, and the United States and the European Union are preparing sanctions against Russia, whose troops have been occupying Crimea for several weeks.

Crimean lawmakers have asked the United Nations and other nations to recognize it.

A delegation of Crimean lawmakers is set to travel to Moscow Monday for negotiations on how to proceed further. Russian lawmakers have suggested that formally annexing Crimea is almost certain.

The Kremlin clearly put the issue on a fast track. Both houses of parliament were set to gather for a joint meeting in the Kremlin on Tuesday to hear President Vladimir Putin’s address on the subject.

In Kiev, the national parliament approved acting President Oleksandr Turchynov’s call for a military mobilization that would include 20,000 volunteers with previous military experience, and reservists. Ukraine recently formed a national guard also about 20,000-strong.

Turchynov said the order was necessary “considering the continuing aggression in … Crimea, which Russia is trying to disguise with a large farce called `referendum,’ which will never be accepted by Crimea or the whole civilized world,” he was quoted as saying by the Intefax news agency.

Russia is expected to face strong sanctions Monday from the U.S. and Europe over backing the Crimean referendum, which could also encourage rising pro-Russian sentiment in Ukraine’s east and lead to further divisions in this nation of 46 million. Residents in western Ukraine and the capital, Kiev, are strongly pro-West and Ukrainian nationalist.