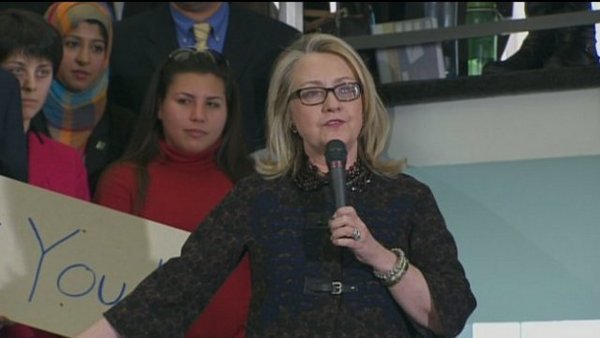 Clinton’s office said nothing was illegal or improper about her use of the non-government account and that she believed her business emails to State Department and other .gov accounts would be archived in accordance with government rules.

“Like secretaries of state before her, she used her own email account when engaging with any department officials,” Clinton spokesman Nick Merrill said. “For government business, she emailed them on their department accounts, with every expectation they would be retained. When the department asked former secretaries last year for help ensuring their emails were in fact retained, we immediately said `yes.”‘

“Both the letter and spirit of the rules permitted State Department officials to use non-government email, as long as appropriate records were preserved,” he said.

For Clinton, the new developments, first reported by The New York Times, place a spotlight on her tenure in the Obama administration as she prepares to launch a widely expected 2016 presidential campaign that Republicans have already started to deride as a third Obama term. They also come after recent examinations of the fundraising practices by the charitable foundation started by her husband, former President Bill Clinton.

Republicans quickly pounced on Clinton’s use of the personal email account, arguing that she failed to comply with the law while serving in the State Department. Kristy Campbell, a spokeswoman for former Florida Gov. Jeb Bush, who is considering a 2016 presidential campaign, said Clinton “should release her emails. Hopefully she hasn’t already destroyed them. Governor Bush believes transparency is a critical part of public service and of governing.” She noted that Bush recently released personal emails from his two terms as governor.

Last month Bush made available on a website more than 275,000 emails sent to and from his personal email account, on which he conducted all state business. The messages released were only those that pertained to state business; those covering politics and personal matters were not included.

Deputy State Department spokeswoman Marie Harf said the agency asked former secretaries of state Madeleine Albright, Colin Powell, Condoleezza Rice and Clinton last year for records that should be preserved. In response to that request, Clinton provided emails from the personal account that she used during her time as the nation’s top diplomat in President Barack Obama’s first term from 2009 to 2013. However, she also said that the department has “long had access to a wide array” of Clinton’s records, including emails sent between her and officials with an official state.gov email address.

Harf says Clinton’s successor, John Kerry, is the first secretary of state to primarily use an official state.gov email account and that the department is now updating its records preservation policies to bring them in line with current regulations. That includes regularly archiving all of Kerry’s emails.

Among the messages Clinton provided were 300 that met the criteria for a request for relevant emails from the House Select Committee investigating the September 2012 attack on the U.S. diplomat mission in Benghazi, Libya, Harf said. Those emails have been turned over to the committee, she added.