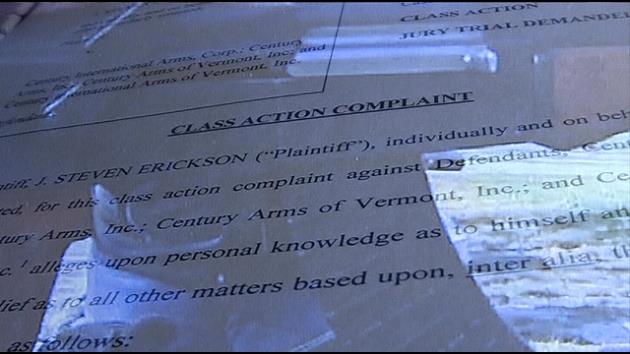 WSVN — A class action lawsuit takes aim at a South Florida gun dealer. It claims certain AK-47 rifles can fire unexpectedly without someone pulling the trigger. Investigative reporter Carmel Cafiero is on the Case.

Watch this demonstration of an AK-47 rifle firing, without a person’s finger on the trigger. The scenario is central to a class action lawsuit recently filed in federal court.

Angelo Marino: "You don’t think of a gun firing without engaging the trigger, and when you see that happen, that’s scary."

Fort Lauderdale attorney Angelo Marino represents a Missouri man who says his AK-47 was being handed to him by someone at a gun range when it fired.

Nobody was hurt, but he is suing Century International Arms, claiming, "It is only a matter of time before individuals are seriously injured or killed."

And, according to the complaint, the Delray Beach company manufactured and sold thousands of allegedly defective AK-47 rifles to consumers across the country.

Angelo Marino: "This is because of a design defect in the rifle."

A gun’s safety, when on, is designed to prevent a weapon from accidentally going off. But the lawsuit alleges that when this lever is raised above the safe position, the rifle fires, even without someone pulling the trigger.

Angelo Marino: "A loved one may be in the way of one of the discharged bullets, and these are powerful weapons. You can sustain a very serious injury."

The lawsuit also claims Century has known about the defect, but failed to warn customers or issue a recall. The plaintiff points to this YouTube video, posted in Jan. 2015, where another demonstration provides an up-close look using an unloaded rifle.

Man on YouTube: "All I’m going to do is rotate this safety upwards, and you’ll notice that it’s going to make contact and it trips the trigger. Now, again, if we had a loaded firearm here, kaboom. You’re going to have a round go off."

Of course, any issue involving guns is bound to be highly charged, especially in an election year. Marino says he expects the lawsuit will be viewed as being politically motivated.

Angelo Marino: "There’s no doubt that in my mind, this is going to be perceived as an attack on the Second Amendment. It is not. I’m a gun owner; this is not against people’s right to bear arms."

A Century International Arms attorney sent 7News an e-mail, reading quote, "It is Century’s policy not to comment on pending litigation. However, Century will be vigorously defending itself against this lawsuit."