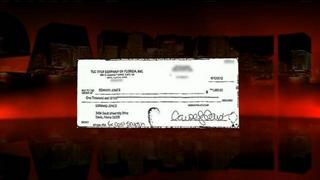 WSVN — Carol Saxton: “It began with me mailing a check to my investment company.”

Carol Saxton is the CEO of a Davie title company. And like most of us, every dollar matters.

So when she sent this check for $1,000 to her investment company, Edward Jones, she never dreamed today she would still be trying to get that money into her IRA.

Carol Saxton: “And I asked them if they received the money and they said no. So I went online banking and saw the check was cashed.”

Carmel Cafiero: “And when you saw it was signed by Edward Jones, what did you think?

Carol Saxton: “I was shocked.”

By mistake the check was sent to the former office of Edward Jones Investments in this Davie mall.

The office is now part of the Nova Southeastern University system. And it just so happens that at the office a man by the name of Edward Jones once worked there as a security guard.

Edward Jones is a 26-year-old father of two.

Carmel Cafiero: “What did you think when you saw that check for $1,000?

Edward Jones: “I say oh my God. I looked at it as a blessing because I definitely need the money at that time.”

Ivan Ramirez: “What are the chances?”

Postal inspector Ivan Ramirez initially investigated the case, the first of its kind in his career.

Ivan Ramirez: “It’s a purely coincidental matter. And then further the fact that he said, yeah I cashed it and listen if I have to pay it back I’ll pay it back. I was really down on my luck.”

Carol Saxton: “To me that’s a slam dunk. When I heard that, I was like great, what’s next?”

But months have passed. No money paid back and now the case has been sent to Fort Lauderdale PD because it did not meet the standards for a federal case.

Carol Saxton: “I’m enraged. I was a true believer of the system. I just can’t imagine that somebody can admit a crime in front of an investigator and walk out of a room.”

Edward Jones: “Of course, I’m definitely a victim. I cashed a check with my name written on it that I thought was for me.”

He says he thought the check was a bonus from work.

This despite the fact the check came from a title company and not his employer, and the memo reads, IRA for Carol Saxton.

Fort Lauderdale’s economic crimes unit has the results of the postal inspection investigation.

fort Lauderdale Detective Deanna Greenlaw: “They’re reviewing all the information in this packet and then they’ll be filing it with the state attorney’s office. It will be up to the attorney’s office as to what charges, if any, will be placed on Mr. Jones.”

Edward Jones: “I should be worried but I’m not worried because I believe God is on my side.”

As far as Carol Saxton is concerned, she’s been out a $1,000 for ten months and can’t understand why this case hasn’t be solved.

Carmel Cafiero: “So where does that leave you today?”

Carol Saxton: “It leaves me sick in the stomach to be perfectly honest.”