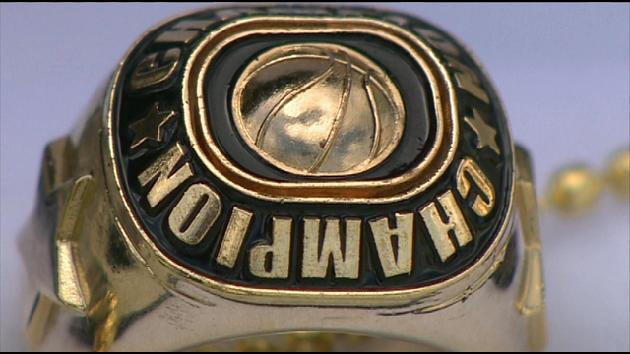 When Tremari and James are on the basketball court, they think about having fun.

James Smith: “This is what I want to do: basketball.”

When Diane watches her son and nephew play, she is thinking about the future as well.

Diane Smith: “My dream is for them to play in the NBA; first to go to college and then go to the NBA.”

James and Tremari are good — their trophies prove that — but last year they joined a park team for another reason.

Tremari Smith: “Well, I’m tired of getting trophies. I see NBA players, college players, basketball players getting rings, and I just want to see how it feels.”

So they joined a league called MDI, where a promise was made to them.

Diane Smith: “For the kids, if they win, they go to the championship, they play on the Miami Heat court, and then there is a ring, which Tremari is really geared up. He’s like, ‘Oh, we are going to win this.'”

The boys played well, and yes indeed, on the Miami Heat court they won the championship.

Diane Smith: “Oh, I was yelling, I was jumping up and down. I was excited.”

But when it came time for the ceremony to hand out the 14-carat rings, James and Tremari were not invited.

Diane Smith: “I was waiting for them to tell us the fitting of the ring. I never got the call.”

Diane says she was told that to get the championship rings the boys had to play for the team next year. Instead, the ninth graders were invited to join the summer league team at Killian High School. When they did that, they were told they couldn’t get their rings.

Diane Smith: “I think that’s crazy, because when you mess with children’s minds. They worked so hard, they been dedicated, when they get to the end, to not get their ring.”

The boys are disappointed they didn’t get a championship ring, and diane is upset to see them upset.

Diane Smith: “It was emotional for me to see my son, to hear my nephew say, ‘We didn’t even get a ring,’ saying, ‘We put so much effort into this and we are not getting anything from [them].’ I just don’t want them to have that bad viper in the back of their brain.”

Well, Howard, the promise the two guys would get a ring was verbal, nothing in writing. So legally, are they out of luck?

Howard Finkelstein: “No. Even though nothing is in writing, this is a straight breach of contract and the guys should get their rings. In most cases, a verbal contract is legally just as good as a written contract.”

We then called the MDI league, which stands for “Motivation, Discipline and Integrity sports.” They said they do have a policy to require the players to come back for the next season to get their championship ring. They said they didn’t know that Diane was upset about the boys not getting their rings. To fix that, they had extra rings, and then they gave the two players their championship rings.

Howard Finkelstein: “The verbal promise for a ring is binding in this case, but in other instances, like the sale of goods over $500, a verbal contract is not binding. Over $500 it needs to be in writing.”

Tremari Smith: “Feel good, feel amazing. It’s so nice that I got my ring.”

The boys got their rings, and if they keep improving, Tremari’s father knows, it won’t be the last one they receive.

Adrian Smith: “They got the ring, so thank you, Help Me Howard. No fussing, no fighting. Thank you.”

Now, Howard said verbal contracts under $500 are binding, but what do you do if the person you made the deal with says, “I didn’t say that?” To use a fancy legal term, that’s when it boils down to a swearing contest. If there are no witnesses, hopefully you will have some texts or e-mails. Otherwise it’s tough, unless the person you are dealing with is honest and tells the truth.

People got you bouncing all over the place? Wanna see ’em get slam dunked? Contact us. We won’t run rings around them, but Howard’s a lawyer, so he can talk circles around them.