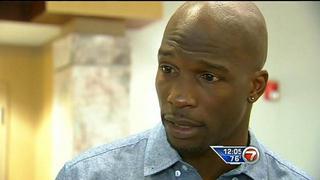 Broward Circuit Judge Kathleen McHugh informed Johnson that he will not have to show up for court hearings from this point forward. He will also not have to report to a probation officer for the remaining six months of his once 12-month long probationary period.

Johnson was the happiest we have seen him in six months, as he goes up to pat his attorney's derriere in court. "I thank the people that I've met throughout this journey," he said outside the courtroom. "I think that storm is over now, and the sun is peeking back out, and I'm just looking forward toward what is to come."

Johnson, a six-time Pro Bowl wide receiver, was arrested in front of his Davie home Aug. 11 for allegedly head-butting then-wife Evelyn Lozada. Davie Police were called following an argument between the couple. Officers arriving at the scene discovered a laceration on Lozada's forehead that required medical treatment.

According to a complaint affidavit, Lozada had confronted Johnson about a receipt for a box of condoms that she had found when he struck her. They divorced shortly thereafter, and he has been ordered to avoid any contact with her.

The 35-year-old former NFL star reached a plea deal with prosecutors in September to serve a year's probation in exchange for pleading no contest to a misdemeanor domestic violence charge. He also agreed to take anger management classes and pay restitution for Lozada's medical bills. "I'm trying to find out how can I channel my anger in situations to where I would pop off," he said on a sports talk TV show.

Speaking of popping off, his ex-wife is no wallflower, as seen during a "performance" on a reality television show. Johnson pleaded no contest and was sentenced to 12 months probation. "I lost three things that I love: football, being married, being a husband, being a lover. It was an honor."

Now, anger management course completed, his probation has been downgraded to one less restriction, and he has hopes of restarting is NFL career. "Hopefully, right now, my focus is to get back in the league, to play the game that I love so dearly, that I worked so dearly since I was a baby to achieve and to make that a dream of mine, and to have that taken away from you is a horrible blow, and I think I learned my lesson."

Hopefully he learned the lesson. Although the rest of his probation has been shifted to the less restrictive administrative probation, where he doesn't have to report to a probation officer, he still has to mind his Ps and Qs and stay out of trouble for the next six months.