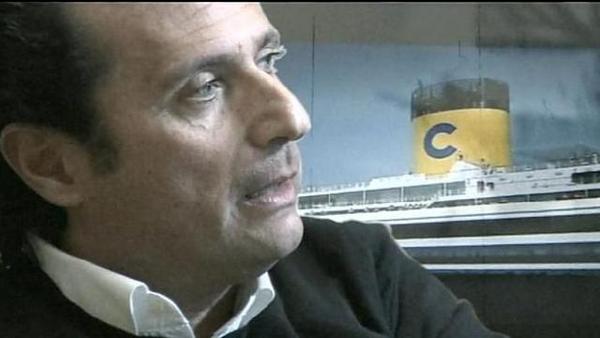 WSVN — Is Francesco Schettino a coward who caused 32 people to die the night his ship capsized? Or is he a professional who did all that he could to avert disaster due to mistakes by his crew? Simple questions with no easy answers.Francesco Schettino: “I’ve been spending half, more than half my life at sea.”

The case Schettino is now presenting to the Italian court is based on many of the same elements he revealed to us in February. A judge will then decide if criminal charges are filed.

Cruise ship captains are not always on the bridge, and on the night the Costa Concordia capsized, Schettino says he came to the bridge only to blow the horn to salute the town of Giglio as the ship passed by.

He says the ship should have been a half mile from shore.

Francesco Schettino: “It was a very pre-planned navigation at a safe distance, from 0.5 from land.”

Concordia’s black box shows that course on the red dotted line to the right, but the solid line to the left shows the course the ship took instead.

Carmel Cafiero: “So why were you off course?”

Francesco Schettino: “We were off course because of a navigational mistake.”

When he realized land was dead ahead, Schettino says he ordered a course change.

Francesco Schettino: “Even now with this evidence, it seems people didn’t like to understand.”

To this day Schettino says he does not know why the helmsman turned the wrong way.

Carmel Cafiero: “Do you have an answer to that question yet?”

And he’s not likely to get an answer anytime soon. According to The Jakarta Post, the Indonesian helmsman is not going to return to Italy to testify.

Schettino’s explanations have not deterred prosecutors. They want manslaughter charges against him and four crew members, including the helmsman.

Francesco Schettino: “I am very confident.”

In an exclusive interview from Italy via Skype, Schettino says he believes the hearing is going well and that the judge is a fair man.

Francesco Schettino: “The key point, the focus point of this question is why we have to treat a maritime accident like a crime.”

He got help from a member of the U.S. National Transportation Safety Board, who reportedly told the media in Italy he believed Schettino had avoided a “Titanic-like tragedy.”

Francesco Schettino: “I was happy that they start now to understand.”

He maintains now, as he did earlier this year, authorities should be investigating what went wrong and how to prevent it in the future.

Francesco Schettino: “To me, it’s important to pay tribute to those casualties, to the memory of these people, and the only homage I can make to them is to find out what went wrong.”

In the meantime, authorities have frozen his assets, even his motorbike.

Francesco Schettino: “To me this is a measure of revenge.”

And now Costa wants Schettino to pay for the loss of their ship.

Carmel Cafiero: “They want you to pay for it?”

Francesco Schettino: “Yeah, yeah, yeah. I can do that.”

He can joke, but make no mistake: Schettino’s future is on the line, and Italian prosecutors are determined to make him pay for the Concodia tragedy.