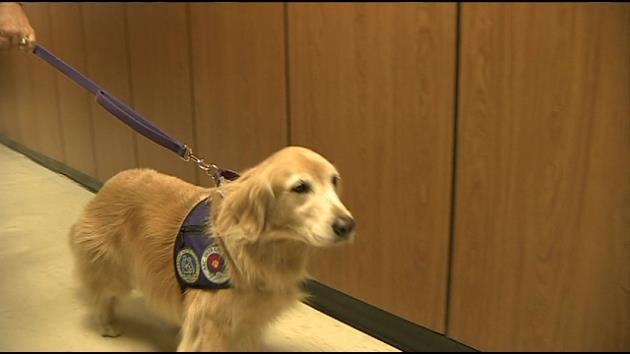 The benefits of therapy dogs for soldiers seniors and the sick have been well documented, but a new program in South Florida is aiming to help a different group, children caught in the court system. Carmel Cafiero is On the Case.

It’s a Thursday afternoon and Coral Gears up to do what the 7-year-old does best, comfort people.

But on this day she’s headed into a place normally associated with gavels – not Golden Retrievers, the Broward County courthouse.

Coral and her owner Judy Eason are volunteers with the Fort Lauderdale organization Canine Assisted Therapy Incorporated. Coral has already logged more than 700 hours helping those in need.

Judy Eason: “She has really a wide range of experience now and absolutely nothing phases her. She just rolls with everything.”

And that’s a good thing because the cases in Judge Susan Lebow’s chamber, where Coral now works once a week, involve children and teens in trouble with the law. A few even arrive in custody and in chains.

Judy Eason: “What we try and do is get her to see the children before they go into the judge’s chamber. And once they start petting her, you know, it’s one of these, and you can just see them relax.”

And Coral’s calming presence is the point of this program. These children all have troubled pasts removed from their homes because of abuse, neglect or abandonment. Some are now even facing criminal charges.

Judge Susan Lebow: “For the most part, not all, but many are very belligerent, very angry and their demeanor changes. When their petting that dog they are not scowling at me.”

We will not show his face but this boy smiled as he fed Coral before his case began. He’s facing arson and burglary charges.

During the days we watched, there were some kids who interacted with Coral and others who ignored her. This 13-year-old wanted nothing to do with the dog or with the warnings the adults in the room gave him about his future.

Man: “They reported that he was making different gestures with his middle finger, cussing at people, opening the door while the vehicle was moving.”

Judge Susan Lebow: “All he wants to do is help, so that you don’t wind up in prison cause that’s the road you’re going on.”

Judge Lebow knows that spending a few minutes with a therapy dog won’t change these children’s’ lives but there is a benefit.

There is one other dog in the Broward pilot program, a three-legged shepherd mix named Roo-Roo.”

Broward court administrators say the goal is to expand.

Lynn Allen: “Certainly other dependency divisions, both with the judges and the general magistrates. In any other hearing type where a child was involved in a proceeding, which may mean a family case, certainly a delinquency case, and perhaps the criminal arena as well.”

As for Coral, she does get rewarded for work by a judge who has her own two rescue shepherds at home.

Judge Susan Lebow: “I think she smells my dogs on me too so that pretty much tells her that I’m a dog person and that I’m safe.”