Bush preparing to delegate many campaign tasks to super PAC 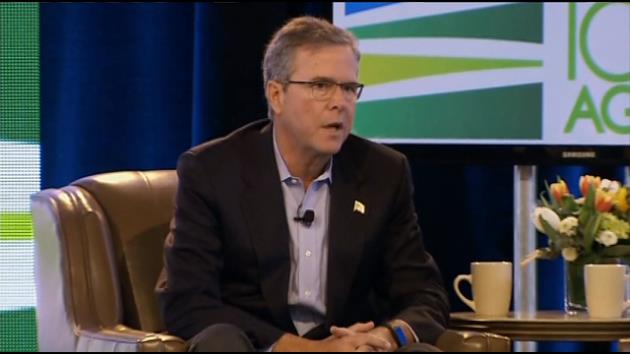 DES MOINES, Iowa (AP) — Jeb Bush is preparing to embark on an experiment in presidential politics: delegating many of the nuts-and-bolts tasks of seeking the White House to a separate political organization that can raise unlimited amounts of campaign cash.

The concept, in development for months as the former Florida governor has raised tens of millions of dollars for his Right to Rise super PAC, would endow that organization not just with advertising on Bush’s behalf, but with many of the duties typically conducted by a campaign.

Should Bush move ahead as his team intends, it is possible that for the first time a super PAC created to support a single candidate would spend more than the candidate’s campaign itself — at least through the primaries. Some of Bush’s donors believe that to be more than likely.

The architects of the plan believe the super PAC’s ability to legally raise unlimited amounts of money outweighs its primary disadvantage, that it cannot legally coordinate its actions with Bush or his would-be campaign staff.

“Nothing like this has been done before,” said David Keating, president of the Center for Competitive Politics, which opposes limits on campaign finance donations. “It will take a high level of discipline to do it.”

The exact design of the strategy remains fluid as Bush approaches an announcement of his intention to run for the Republican nomination in 2016. But at its center is the idea of placing Right to Rise in charge of the brunt of the biggest expense of electing Bush: television advertising and direct mail.

Right to Rise could also break into new areas for a candidate-specific super PAC, such as data gathering, highly individualized online advertising and running phone banks. Also on the table is tasking the super PAC with crucial campaign endgame strategies: the operation to get out the vote and efforts to maximize absentee and early voting on Bush’s behalf.

The campaign itself would still handle those things that require Bush’s direct involvement, such as candidate travel. It also would still pay for advertising, conduct polling and collect voter data. But the goal is for the campaign to be a streamlined operation that frees Bush to spend less time than in past campaigns raising money, and as much time as possible meeting voters.

Bush’s plans were described to The Associated Press by two Republicans and several Bush donors familiar with the plan, who spoke on condition of anonymity because the former Florida governor has not yet announced his candidacy.

“This isn’t the product of some genius thinking,” said a Republican familiar with the strategy. “This is the natural progression of the rules as they are set out by the FEC.”

Bush spokeswoman Kristy Campbell said: “Any speculation on how a potential campaign would be structured, if he were to move forward, is premature at this time.”

The strategy aims to take maximum advantage of the new world of campaign finance created by a pair of 2010 Supreme Court decisions and counts on the Federal Election Commission to remain a passive regulator with little willingness to confront those pushing the envelope of the law.

One reason Bush’s aides are comfortable with the strategy is because Mike Murphy, Bush’s longtime political confidant, would probably run the super PAC once Bush enters the race. Meanwhile, David Kochel, a former top adviser to Mitt Romney’s campaigns and an ally of Bush senior adviser Sally Bradshaw, would probably be the pick to lead Bush’s official campaign.

“Every campaign is going to carefully listen to the lawyers as to what is the best way to allocate their resources and how to maximize them,” said Al Cardenas, former chairman of the American Conservative Union and a Bush adviser. “Nobody wants to relinquish any advantage.”

For Bush, the potential benefits are enormous. Campaigns can raise only $2,700 per donor for the primary and $2,700 for the general election. But super PACs are able to raise unlimited cash from individuals, corporations and groups such as labor unions.

In theory, that means a small group of wealthy Bush supporters could pay for much of the work of electing him by writing massive checks to the super PAC. Bush would begin a White House bid with confidence that he will have the money behind him to make a deep run into the primaries, even if he should stumble early and spook small-dollar donors, starving his own campaign of the money it needs to carry on.

Presidential candidates in recent elections have also spent several hours each day privately courting donors. This approach would not eliminate that burden for Bush, but would reduce it.

The main limitation on super PACs is that they cannot coordinate their activities with a campaign. The risk for Bush is that his super PAC will not have access to the candidate and his senior strategists to make pivotal decisions about how to spend the massive amount of money it will take to win the Republican nomination and, if successful, secure the 270 electoral votes he will need to follow his father and brother into the White House.

“The one thing you give away when you do that is control,” Kaufman said.

Bush will also be dogged by advocates of campaign finance regulation. The Campaign Legal Center, which supports aggressive regulation of money and politics, has already complained to the FEC that Bush is currently flouting the law by raising money for his super PAC while acting like a candidate for president. Others are on guard, too.

“In our view, we are headed for an epic national scandal,” said Fred Wertheimer, president of the pro-regulation group Democracy 21. “We intend to carefully and closely monitor all the candidates and their super PACs, because they will eventually provide numerous examples of violations.”

All of the major candidates for president will have the backing of a super PAC in 2016. Texas Sen. Ted Cruz already has the support of four. After spending $65 million to boost President Barack Obama’s re-election bid in 2012, a super PAC named Priorities USA is ready to help Hillary Rodham Clinton win the Democratic nomination.

But the approach Bush is charting would mark a rapid evolution of the super PAC’s role, which got started in presidential politics when former Romney aides set one up to support him at the outset of the 2012 campaign.

In hindsight, Romney campaign lawyer Charlie Spies and others in his inner circle saw that super PACs, with their ability to raise unlimited money, could have done more. Spies is now legal counsel in Bush’s political operation.

“Super PACs will play a bigger role in the 2016 presidential campaigns than they did in 2012,” said Beth Myers, a senior aide to Romney, speaking generally and not specifically about Bush’s intentions.

“The smart campaigns will restructure and adapt,” she said.

The primary complication is the ban on coordination. For example, if the campaign decided to change its focus from one issue to another, it could not share that decision with the super PAC.

But there are ways around the restriction. The super PAC could take its cues from Bush’s public statements, or an inexpensive video posted online by the campaign for all to see. Something as simple as a tweet could be a driving directive.

One way Bush is already addressing the coordination ban is by frontloading his efforts inside Right to Rise. Because he is not yet a candidate, he can now spend time raising money for the super PAC and take part in strategic campaign planning under its auspices.

Bush makes clear at every public event, as well as his private fundraisers, that he is not yet a candidate. Asked last week in New Hampshire about the allegations he’s already breaking the rules, Bush said, “We’re living within the law, for sure.”

Another means of dealing with the coordination ban would be to put Murphy in charge of the super PAC, as is expected. He has been deeply involved in Bush’s steps, courting donors, selecting staff and developing strategy. The idea is that once Bush breaks away to form a campaign, Murphy, Bradshaw and Kochel will have spent enough time working together so that the two groups will move in sync.

Critics also believe that coordination can take place surreptitiously, and such illegal activity isn’t punished by an FEC comprised of three Democratic and three Republican members unable to agree on almost anything. Last year, the FEC found only 16 violations of campaign finance law and leveled just $200,000 in fines — a record low for recent years.

“It’s up to only the Justice Department, because the FEC for all practical purposes … will not enforce the law,” Wertheimer said.

But former FEC commissioner Scott Thomas, a Democrat, doubts the Justice Department would ever look at such a case because the FEC, despite being considered ineffectual by critics, has been so precise in detailing what is allowed and what is not.

“You’d have to show a true smoking gun, showing the candidate controlling the campaign and the super PAC,” said Thomas, a lawyer now in private practice in Washington. He can’t see campaign operatives being that clumsy: “It would have to be a smoking gun left by someone who had the intelligence of an advanced fern.”