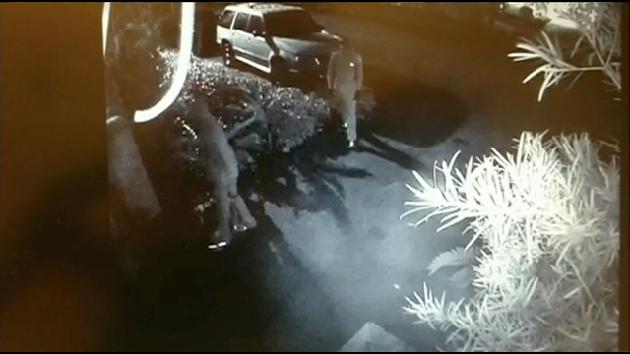 Police have released grainy surveillance images of the two people who allegedly broke into the home of Miami Heat player Chris Bosh, investigators’ most concrete clue to date as they continue their investigation of the April 4 burglary.

Authorities said they released the footage in the hopes that someone will recognize the suspects who, they contend, walked away with hundreds of thousands of dollars in cash, jewelry and designer purses from the NBA star’s Miami Beach mansion.

The footage shows two people approaching the house and climbing over the gate. Police said the subjects then entered the house through an unlocked door. Bosh was out of his residence with his wife Adrienne that night, celebrating his birthday.

The basketball player said that, among the items that were stolen from his home were two of Adrienne’s purses, valued at $155,000, and 12 watches valued at over $300,000. His 2012 NBA championship ring was not taken.

Nine days after this incident, Bosh’s Miami Heat teammate Udonis Haslem had his own four-acre estate in Southwest Ranches burglarized. In this case, however, the perpetrators left the premises without taking a single item. Authorities said the subjects had put thousands of dollars in valuables in garbage bags but fled before taking any of it with them. Police are looking to find a connection between both burglaries.

One of the men in the Bosh burglary footage seems to be wearing sneakers with a unique reflecting item.

If you recognize any of the individuals in the surveillance video, or have any information on this burglary, call Miami-Dade Crime Stoppers at 305-471-TIPS. Remember, you can always remain anonymous, and you may be eligible for a reward.