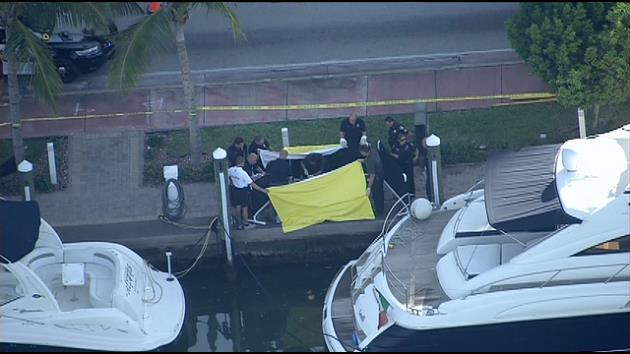 MIAMI BEACH, Fla. (WSVN) — Police are investigating after a man’s body was found in the water wedged between a yacht and the sea wall in Miami Beach Friday.

Skyforce HD hovered above the scene off Collins Avenue and 47th Street as Miami Beach Police detectives and crime scene investigators attempted to figure out the body’s identity and how it ended it up in the area.

The body was found around 10:30 a.m. in Indian Creek, a heavily-populated area of mid-Miami Beach. Police said the victim was an out-of-state man in his mid-40s.

A local resident who was out running when she saw the police activity said this is a quiet neighborhood. “It’s horrible,” she said, “and at this part of the city? I actually like it because it’s so quiet here. That’s horrible. That’s something to think about, and then we do have so much police here throughout the night. Usually we have more police here than the whole Miami Beach. That’s weird, ooh! That’s scary. That’s creepy.”

A woman who was a guest in the yacht next to the berth where the victim’s body was found said she woke to make the disturbing discovery. “Well, [I was] a little shocked, and I haven’t seen this before,” she said.

“We actually found it this morning, after we woke up,” she continued.

Investigators spent several hours at the crime scene. The victim’s body was later taken to the medical examiner’s office.

Sources told 7News one of detectives’ theories is that the victim tried to get on board the yacht, slipped and fell. They said the victim then perhaps hit his head and drowned.

Police said they are attempting to contact the victim’s family. The investigation remains ongoing.

If you have any information on this death, call Miami-Dade Crime Stoppers at 305-471-TIPS. Remember, you can always remain anonymous, and you may be eligible for a reward.