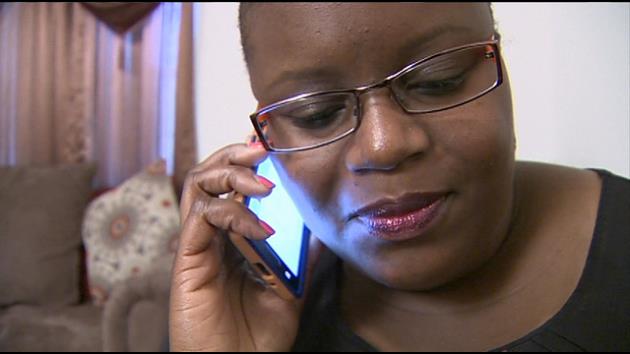 When times get tough, whether its losing a job or an unexpected expense, people fall behind on their bills, and that’s when the phone calls start from bill collectors. So how can you stop the barrage of calls? It’s why one woman called Help Me Howard With Patrick Fraser.

Angela Robinson: “It means clocking into an actual job, clocking out and then clocking in to being a mom.”

Patrick Fraser: “Which one is harder?

Angela has two teenage boys and an ex that doesn’t pay child support, so times are always tough for her.

Angela Robinson: “There was a choice that month: Either I pay you or I pay FPL, and I had to pay FPL.”

In March, Angela chose to keep the power on instead of paying the $103 for a personal loan she has.

Angela Robinson: “I was behind one month, and I started receiving calls from one of the gentlemen from the company.”

Every day, the man from the loan company, who called himself Mr. Surls, would call her.

Angela Robinson: “It was basically a call a day, some days three calls, four calls, one day even like seven calls.”

In April, Angela made her monthly payment, but she couldn’t pay the prior month’s bill, leaving her still a month behind, so the calls kept coming.

The calls at work are embarrassing, and worry her.

Angela Robinson: “I have told him several times to please stop, especially calling my job. I can’t afford to lose my job. I’m the only income in my household.”

But the calls keep coming, even to her mother.

Angela Robinson: “It’s like crazy harassment, and especially for just being a month behind.”

The calls are from a loan servicing company called Green Tree, which has been criticized across the country for its collection methods. Add Angela to the list.

Angela Robinson: “Yes, we should pay our bills on time, but I am not like I’m six, seven months behind, just a month.”

With money tight, Angela can’t afford the $103 to catch up, and can’t deal with the collection calls. So, Howard, legally what can she do?

Howard Finkelstein: “If this was a debt collection agency, under federal law you could stop them, by letting them know in writing you don’t want to be contacted. But this is a lender, and by that same federal law, they can call you. However, there is a solution. Florida has what’s a Harassing Phone Call Statute, which says, if someone makes repeated calls solely to harass you, it’s a crime. If they continue, call the police, and if they tell you it’s a civil matter, tell them they are wrong and to talk to the state attorney.”

I spoke to a company official at Green Tree who told me he would do what he could to help, and he did. Angela says they agreed to move the late payment to the back end of the loan, meaning Angela is now current with her payments.

Angela says the company official also told her they didn’t have any record that she told them to stop calling till May. Since Green Tree solved her problem, Angela doesn’t have to worry about calls anymore, and is current on her payments, but if you have a lender you can’t work with, Howard said you have options.

Howard Finkelstein: “If you have a debt that’s difficult to pay, try to negotiate with the lender. If that doesn’t work, you can stop paying, but it will ruin your credit. And some attorneys will tell you, it’s best to just get it over with and file for bankruptcy. In this case that would wipe out Angela’s debt, but her credit would be damaged, so keep all of that in mind before you make a decision.”

Angela Robinson (looking at her cell phone call log): “A few times on the 30th, another time on the 30th.”

Glad we were able to help Angela out a little. Now, Howard said if someone refuses to stop calling you, it’s a crime. You can also go after them civilly and you can collect money, but that requires an attorney, and if you can’t pay a bill, odds are you can’t pay an attorney.

Anyway, if you want to stop a debt collector, the information to do that, plus how to put your phone on the “do not call” lists are all at the end of this Help Me Howard.

Collecting problems like a billionaire collects millions? Ready for things to pay off for you? Call us. We will be in debt to you, cause we like to help people.