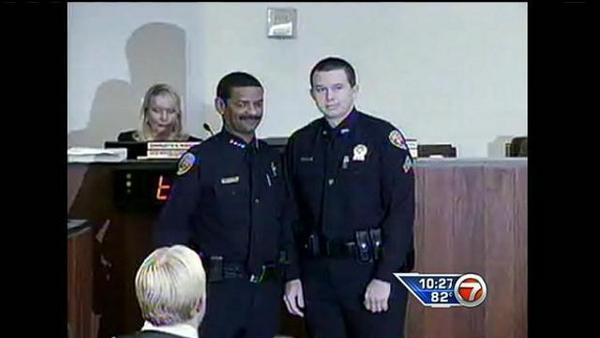 Carmel Cafiero: “It was just before 5 a.m. here at the exit off the Turnpike on Sunrise Boulevard. A passing motorist reported seeing the police car empty and stuck in the mud. The doors were unlocked and the trunk was open.”

State troopers and Fort Lauderdale police were called to the crash site. According to investigative reports, Officer Falzone first left the scene but later returned.

A Florida Highway Patrol trooper said she “could smell an odor of an alcoholic beverage emitting from the officer’s facial area.” When asked how many drinks he had he replied, “None.” FHP did not test him for alcohol.

Carmel Cafiero: “Did Officer Falzone get special consideration because he was a police officer in this incident?

Florida Highway Patrol Sgt. Mark Wysocky: “No, he did not.”

FHP spokesman, Sergeant Mark Wysocky, says because Falzone left the scene, there was no way to know when he had been drinking, and there was no witness to put him in the driver’s seat.

Sgt. Mark Wysocky: “We as a law enforcement agency don’t have anybody to substantiate that he was behind the wheel. Once he left the scene, we don’t know what he did. He may have went home and had three drinks and come back to the scene.”

However, the Fort Lauderdale Police officers on the scene did believe Falzone was driving the car and ordered him to take an immediate breath alcohol test. Falzone was later fired as a result of the Internal Affairs investigation into the crash.

Fort Lauderdale Police Chief Frank Adderley: “It determined that he used poor judgment in driving his marked police car off duty, and was intoxicated based on our investigation.”

In 2008, Chief Adderley recognized Officer Falzone in front of the city commission for outstanding police work.

But the chief’s opinion changed this year after the Internal Affairs investigation revealed Falzone had spent hours at a party with other officers and was driving as fast as 95 miles per hour before he went off the road.

Chief Adderley: “I think the preponderance of everything that was there and the totality of the circumstances, you know, I feel we made the right decision, and, you know, that’s why we recommended termination.”

FHP did give Falzone a ticket.

Mark Wysocky: “He was charged with careless driving.”

The ticket was later dismissed by a traffic hearing officer, but there is no court record as to why. Falzone has moved out of town. We left a business card at his address after being ordered off the property. So far, no response.

Carmel Cafiero: “There’s no doubt an administrative investigation, like the police department did, doesn’t require the same level of proof as a criminal case. And while Vincent Falzone didn’t get charged criminally, he did pay a heavy price. It cost him his career with the Fort Lauderdale PD. Carmel Cafiero, 7News.”

If there’s something you think Carmel should investigate, send an e-mail to clue@wsvn.com