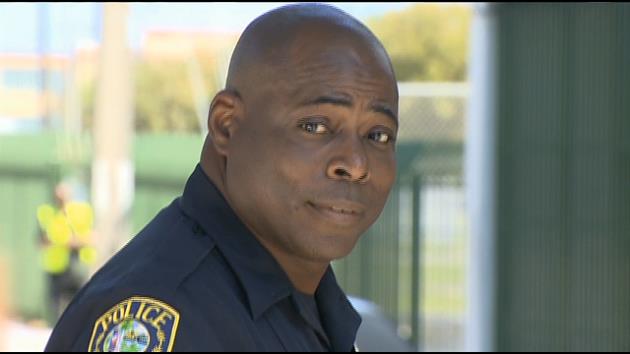 We’ve all heard of celebrity sex tapes, but here in South Florida, a sex tape has cost a local police officer his job. Investigative reporter Carmel Cafiero is On the Case, but we must warn you the subject matter and video may not be suitable for young viewers.

WSVN — Students at Miami Edison Senior High come to school to learn, but a police officer here has learned the lesson of a lifetime. A video submitted anonymously to 7News shows a sex act by a Miami-Dade Schools police officer while in uniform and wearing his badge.

We may never know what 43-year-old Steven Rodgers was thinking when he allowed himself to be videotaped in his office pleasuring himself, but we do know it has to be a decision he now regrets.

Steven Rodgers: “How are you?”

Carmel Cafiero: “I’m fine, thanks, and could we get you alone for a minute? I need to talk with you about something personal.”

He left the patrol car but was not willing to talk on camera.

Carmel Cafiero: “And I really need to show you something from a video that we’ve been given, and it’s a video of you. Can I show you?”

Carmel Cafiero: “You won’t look at it?”

Carmel Cafiero: “We’ve been given a video of you apparently pleasuring yourself in your office here at the school. This is what the video shows, and I need to ask you about that.”

Officer Rodgers did say he was not allowed to speak on camera while in uniform.

The anonymous person also allowed police to see the video.

Carmel Cafiero: “Could you believe what you were seeing?”

Miami-Dade Schools Police Chief Ian Moffett: “I was appalled. I was appalled. That does not reflect the culture of our organization and the school district and what we stand for.”

Chief Ian Moffett says Rodgers was removed from duty. He then resigned from the department. But it’s not over for Rodgers. The incident will be reported to the Florida Department of Law Enforcement, which controls certification of police officers.

Chief Ian Moffett: “This is a very serious incident. The school district, along with the police department, uh, we do not condone this type of behavior, and I’m sure FDLE will take also a hard look at this.”

If his certification is taken, Rodgers’ career as a law enforcement officer is over. Although there’s no doubt the video was taken in Rodgers’ office at Miami Edison Senior, the chief believes it happened during Christmas break, when children were not in school.

Carmel Cafiero: “At one point in the video, a woman’s hand is visible. She has not been identified, although authorities think it was an adult and say that part of the investigation is still open. Carmel Cafiero 7 News.”