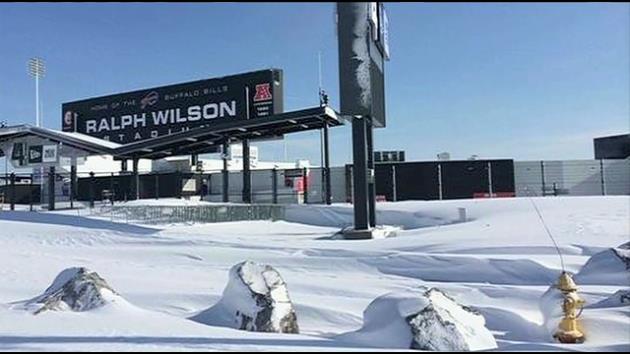 BUFFALO, N.Y. (AP) — Residents of western New York may soon have to worry about the water in their basements as well as the snow on their roofs.

After a three-day onslaught that dumped a historic 7 feet of snow on the Buffalo area and killed at least 12 people, the sun came out Friday, but so did predictions of flooding caused by rain, temperatures up to 60 degrees and blocked catch basins.

“We are preparing now for more flooding than we’ve seen in a long, long time,” Gov. Andrew Cuomo said. “We still have that challenge to look forward to.” Cuomo said the state was sending in pumps, boats, helicopters and high-axle vehicles that can operate in 4 to 5 feet of water.

“If we’re lucky we won’t need any of it,” he said. “But prepare for the worst and hope for the best.”

The National Weather Service issued a flood watch for Sunday to Wednesday.

The snow remained a huge challenge. Officials were still urging people to put off nonessential travel so snow removal efforts could progress. Cuomo reopened a 132-mile stretch of the state Thruway that had been closed since Tuesday, but several exit ramps remained closed along the westernmost 75 miles.

“Assume if you get on headed west you can’t get off until Pennsylvania,” the governor said. He said roads remain “very dangerous.”

Local travel bans were beginning to be lifted Friday so delivery trucks can bring in food and other essentials to depleted supermarkets, the governor said.

He warned, however, that lifting the travel bans was not a signal that “all is fine.”

Two more deaths were announced. A 50-year-old man was found Friday morning in his car, which was buried in snow in Cheektowaga, police said. The cause of death wasn’t immediately known.

One elderly resident of a nursing home, also in Cheektowaga, died after it was evacuated amid concerns of a roof collapse, a spokeswoman for the home said.

More than 30 major roof collapses, most involving farm and flat-roof buildings, were reported overnight, officials said Friday, and warm temperatures could make the snow even heavier.

Richard Tobe, the deputy Erie County executive, said more than 50 people were evacuated from several mobile home parks in suburban Cheektowaga and West Seneca on Thursday because roofs were buckling. At least 90 small roof collapses involving carports and other structures had been reported by Friday morning, in addition to damage to a pharmacy and a metal warehouse operated by a Christmas decorations company, where damage was estimated in the millions.

Some farm animals had been injured in damaged barns, he said.

Friday’s improved weather inspired some homeowners to climb onto roofs to shovel off the snow and reduce the danger of collapse.

“Five hours yesterday and that’s just the beginning,” John Normile of Lake View said as he and his daughter and her boyfriend cleared up to 6 feet of snow from the roof of his ranch-style home.

“We’re getting really concerned about the weight of it,” Normile said. “We’ve got to do it before the rain comes.”

Weather Service meteorologist Jon Hitchcock said there might be trouble with drainage as snow and the uncollected autumn leaves underneath blocked catch basins.

“The biggest flood threat would be on Monday when temperatures are at their warmest,” he said. “There could be general urban flooding.”

“There’s roughly the equivalent of six inches of rain in the snowpack that will essentially be released over two days,” Tobe said. “If it was released as rain it would be a monumental storm.”

He said flooding would likely affect mostly basements and creeks.

“It’s not going to be this giant flooding like you see in hurricanes,” he said.

The American Red Cross issued an appeal for blood donations in the Rochester area, saying the snowstorms caused the cancellation of more than 50 blood drives. And Cuomo relaxed some rules governing prescription drugs, allowing patients to get prescription refills at any pharmacy that can verify them and letting doctors write new prescriptions more than seven days before the end of an earlier prescription.