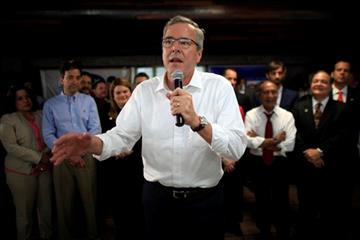 While many Republicans expect Bush to have raised $100 million by the time he declares his candidacy, Clinton advisers say that’s their modest goal for the entire primary season.

The reality is that both campaigns will be flush with high-dollar donors. Bush and Clinton could each pull in more than $1 billion if they become their party’s nominee. But the disparate early signals Bush and Clinton are sending about campaign cash underscore the contrasting ways the heirs to two political families are positioning themselves in the 2016 presidential contest.

For Bush, building a fundraising juggernaut is seen as a way to surge ahead of rivals while ensuring he has the money to stay competitive if the race drags on into next spring or summer. The former Florida governor isn’t expected to launch his campaign until at least June, giving him more time to raise money aggressively for his Right to Rise super PAC before he’s legally barred from coordinating with the organization.

For Clinton, who so far faces no serious primary competition, lowering fundraising expectations is an effort to dispel the notion that she is her party’s inevitable nominee. She’s holding a smattering of lower dollar campaign fundraisers, with tickets running $2,700 per person, during the next two weeks.

Clinton had originally planned to wait until May to start fundraising, but told advisers she was concerned about the prowess of Bush’s money operation and wanted to start sooner, according to a person familiar with the campaign plans. That person was not authorized to discuss the campaign’s plans and insisted on anonymity.

Clinton has so far taken no direct action to bolster the Democratic super PAC, Priorities USA Action, nor has she signaled to supporters that they should be funneling money to it.

Instead, the Clinton campaign is trying to infuse its fundraising operation with more of a grassroots feel. Top donors are being asked to call and email their contacts, then track their contributions on personalized fundraising pages. There’s a greater emphasis on attracting smaller donors, something President Barack Obama did effectively during his two campaigns.

Another benefit for skipping opulent fundraising parties? “No one has to hire a caterer,” Leesfield quipped.

Bush invited more than 300 donors to Miami’s glamorous South Beach this week for a private two-day retreat at an eco-friendly seaside hotel. Donors received policy briefings from Bush advisers and mingled at a rooftop cocktail party.

Bush, who has headlined more than 60 fundraisers this year, told donors he had set a record for Republican political fundraising. Right to Rise doesn’t plan to release any fundraising numbers until July, and Bush did not provide donors with a figure to back up his assertion.

Advisers said Bush was comparing his current totals with the $37 million his brother George W. Bush raised in the first months of the 2000 presidential campaign, before the era of super PACs and unlimited donations.

It appears likely Bush will hit $100 million by the time his super PAC releases figures this summer.

While most Republican strategists expect Bush to lead his rivals in the early fundraising race, it’s unclear how significant his advantage will be. Sens. Marco Rubio of Florida, Ted Cruz of Texas and Rand Paul of Kentucky have all displayed fundraising prowess. And some billionaire donors are yet to commit to a candidate.

Without the big gang of rivals, Clinton sees little incentive in focusing on fundraising at this stage, at least publicly. Her finance team has set a $100 million goal for the primary and does not plan to take general election money initially. During her failed 2008 race against Obama, Clinton raised $229 million before bowing out of the primary, though some of that money was allocated for the general election.

Priorities USA officials say they expect the organization to keep a narrow focus on television and digital advertisements during the 2016 contest. Bush, meanwhile, is considering a plan that would shift some core campaign functions to his super PAC.