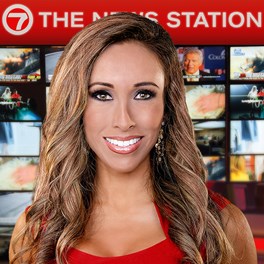 Diana Diaz loves being a part of the #1 rated morning newscast in South Florida. The co-anchor of Today in Florida was born in Nicaragua and grew up in Miami, graduating at the top of her class from Coral Gables Senior High School where she was on the National Champion dance team, the Gablettes. She also cheered for the Gators while at the University of Florida, on the Dazzler dance team, was the Vice President of Alpha Delta Pi sorority, and continues to love all things orange and blue! She started her career at WUFT-TV in Gainesville and while anchoring at WWCI-TV in Vero Beach, received the “Best Newscast Award” from the Community Broadcasters Association. She was thrilled when she became part of the 7 News team as a reporter where she covered breaking local news and travelled the country and abroad for big national and international stories. She got exclusive interviews with news-makers, politicians, and interviewed presidents and celebrities along the way.

She was the co-host of WSVN’s popular entertainment show, Deco Drive where she dished on the day’s entertainment headlines before making the move to delivering news, fun, and entertainment to start people’s day on Today in Florida.

Diana feels blessed to live in her hometown and be able to give back. She donates her time to several local charities and is involved in the American Nicaraguan Foundation which provides food, shelter, and education to children and families in her native Nicaragua. She has also gone on several mission and medical mission trips to Central America and was 1 of 5 Nicaraguans recognized as “Nicaraguans Who Shine Outside the Country”.

In her spare time she is a regular actor in Fam Jamz, a comical and virtues-based theatrical show for kids. She also coaches youth cheer and dance. She doesn’t cook but this foody loves to eat other people’s cooking which is part of the reason you can find her at fitness classes throughout South Florida where she loves to try everything from Cross Fit to the Bar Method. She enjoys the outdoors and whether it’s hiking or fishing, loves nothing more than to do it all with her husband and three kids.