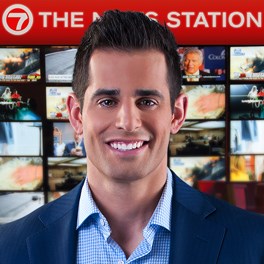 Prior to joining WSVN, Chris was the entertainment reporter at WOIO-TV, the CBS affiliate in Cleveland, Ohio, a radio personality on WDOK and also a writer for Cleveland Magazine. He is a voting member of the Broadcast Film Critics Association and has reported from the Academy Awards, Grammy Awards, Cannes Film Festival and Toronto International Film Festival.

In 2011, Chris was named Cosmopolitan Magazine’s Bachelor of the Year and donated the $10,000 prize money to The Boys and Girls Clubs of Cleveland. He was also awarded the “Personality of the Year” honor from the Broadcasters Hall of Fame in 2012.

Chris got his feet wet in the world of broadcasting working behind the scenes at Rogers Community Television and AM570-News in Kitchener, Ontario before landing his first on-air job as a news reporter and videographer for CHEX-TV in Peterborough just days after graduating from Wilfrid Laurier University in Waterloo, Ontario with a Communication Studies degree.

Chris then made the move to Vancouver where he worked as a host and producer on the award-winning entertainment magazine show “969” which aired nationwide on Citytv and the Much Music owned station, Razer (now MTV2). Chris returned to Ontario to become a host and producer for SUN TV’s entertainment show “Inside Jam” and a weekly addition to Toronto’s #1 radio station, 99.9 Virgin Radio.