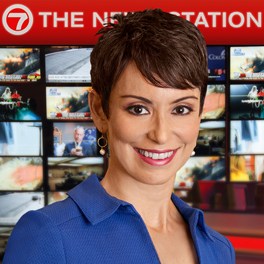 Five time Emmy award winning journalist Belkys Nerey has been a TV junkie her whole life. It’s no wonder she grew up to be a main anchor, and host of her own cooking show, at one of the country’s most dynamic television stations.

Infinitely watchable, Belkys is one of those few personalities who genuinely project.  Whatever ‘It’ is that propels a TV personality and draws audiences to them, Belkys clearly possesses.

Born in Havana and raised in Long Island and Miami, Belkys is a natural who took every possible lesson, from piano to ballet to tap. Completely bilingual, she started her television career as a reporter for a South Florida cable station. She was a “one-man band” for more than two years (shooting her own video and editing her own stories), before heading for Connecticut to take a job as general assignment reporter for WTNH-8, the ABC affiliate in New Haven.  From there it was home to Miami’s WSVN-7 where she’s been since 1994.

During her tenure at the Miami Fox affiliate, Belkys has covered major news stories and, up until recently, co-anchored the pop-culture driven Deco Drive. Now you can catch her anchoring the 5,6,10 and 11pm newscasts, alongside Craig Stevens.   When she’s not on the set she’s in the kitchen, hosting her popular “Bite With Belkys” cooking segments and her Emmy nominated 30 minute “Bite” specials.

Her lighthearted interview style and fun loving-personality make everything she does witty, refreshing, and – just like Belkys herself, completely original.