3 rescued after plane crashes into ocean off Haulover Beach 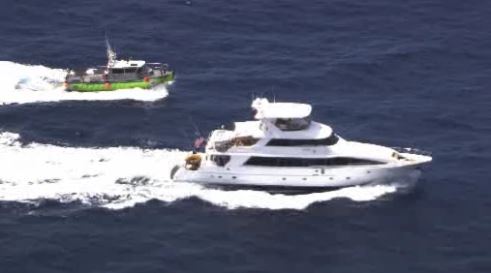 FORT LAUDERDALE, Fla. (WSVN) — Three people were rescued by good Samaritans on a yacht after a Cessna plane crashed in the ocean, east of the Haulover Inlet, Friday.

According to the U.S. Coast Guard, the Cessna 206 plane crashed into the waters 22 miles east of Aventura, at approximately 10:30 a.m. The pilot had reported engine problems, according to the Federal Aviation Administration.

The aircraft had departed Fort Lauderdale Executive Airport en route to Bimini in the Bahamas.

The three people on board the the plane were rescued by people aboard a yacht called the Free Spirit. The boaters witnessed the plane plummet into the ocean and headed toward the crash scene to help.

A passenger on the yacht described the captain’s swift rescue. "I was down below, and the captain saw the plane go down, saw the waves break and he beelined to them pretty quickly," he said. "There were three people on the life raft, and he got them on board pretty quickly. Everyone was unscathed."

Speaking with reporters, yacht owner Sandra Rasmussen said she was glad to be able to come to the passengers’ rescue. "I really can’t give you the odds, but I praise God we were there because if we left there just a little bit earlier or a little bit later, we would not have seen it, and we would not have been able to do what we did."

"We made sure that they had water and blankets and towels, and they were just very grateful," said boater Carol Rasmussen.

Once the three people were rescued from the water, Miami-Dade Fire Rescue sent two paramedics via fire boat to the yacht to evaluate those rescued.

Those rescued were not injured. "I expected to see at least some bruises and cuts, and actually, there were no bruises, no cuts," said Miami-Dade Fire Rescue paramedic Eli Malcon.

Fort Lauderdale Fire Rescue waited for the yacht to arrive with ambulances at the 15th Street Fisheries inside Lauderdale Marina in Fort Lauderdale. Once the yacht docked, rescuers confirmed no one needed transport to the hospital.

The survivors said they were grateful to be back on dry land. When asked whether she feels lucky to be alive, a woman who was on board replied, "Thank God for life."

Family members said the Cessna’s passengers may have been traveling to the Bahamas to celebrate a birthday.

The FAA will investigate the crash.