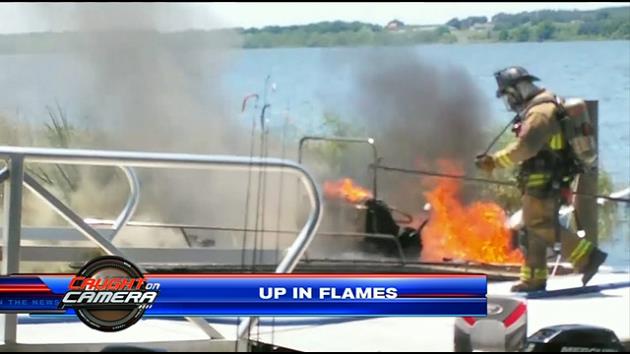 NEAR ORLANDO, Fla. (WSVN) — Mother’s Day weekend took a terrifying turn for a Central Florida family when their motorboat burst into flames, sending two men and a baby to the hospital.

Witnesses said they heard an explosion from Lake Harris in Lake County, Saturday afternoon. "I thought it was a transformer that blew," said area resident Horace Mauldin Jr. "That’s how loud it was."

Mauldin said the victims sustained burns before their 12-foot vessel even left the dock. "The family started getting in their boat, and whenever they turned the key, their boat blew," he said.

The men jumped overboard with the baby and swam to safety as the boat sank. Cellphone video Mauldin shot has become part of a state investigation into what sparked the fire, since an exact cause isn’t clear.

Firefighters tried to put out the flames, but they raged on, destroying the family’s motorboat. "The more water they put on it, the worse the fire got," said Mauldin.

Paramedics rushed to help the burn victims. The men were airlifted to Orlando Regional Medical Center and the baby was rushed to Arnold Palmer Hospital.

"The baby screaming and hollering and all that, that really hurt," said Mauldin.

All three victims are expected to make a full recovery. Officials said the child’s mother was not injured.

Officials pulled the charred boat out of the lake hours later. The Florida Fish and Wildlife Conservation Commission is investigating.