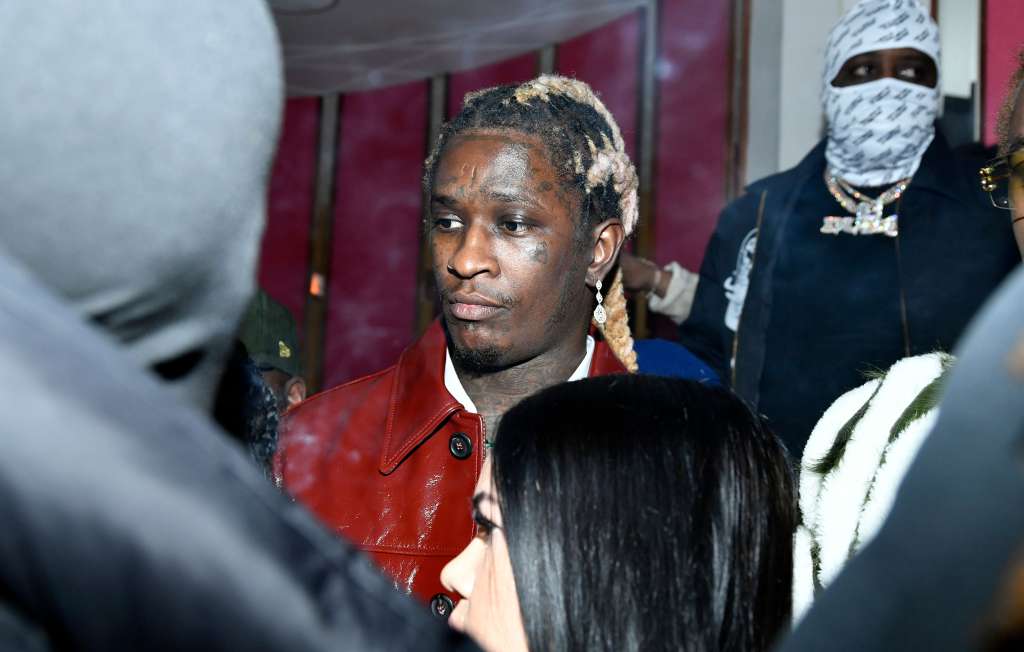 (CNN) — Grammy-winning rapper Young Thug’s lyrics are being cited as evidence in a sweeping 56-count gang indictment, again raising a debate over whether lyrics are protected free speech.

According to the 88-page indictment obtained by CNN, lyrics from the rapper’s popular songs — including “Slime Sh*t,” “Original Slime Sh*t,” and “Anybody” — were used as examples of “overt acts,” some of which constitute racketeering. Prosecutors allege that Young Thug, real name Jeffery Williams, founded the gang Young Slime Life in late 2012 and was a key figure in various YSL activities. Rapper Gunna, real name Sergio Giovanni Kitchens, is also charged in the document. Williams was arrested at his home in Atlanta on Monday, police said.

Most notably, prosecutors said that in 2015, Williams rented an Infiniti Q50 sedan from Hertz, which was later used in the murder of a rival gang member. There are also references that paint Williams as the leader of the YSL gang, as two associates discussed how to obtain his permission to attempt to murder rapper YFN Lucci while he was incarcerated.

“I’m prepared to take them down,” “murder gang sh*t,” and “I never killed anybody but I got something to do with that body” are just a few of the dozens of lines referenced in the indictment.

Lyrics from other popular rappers referencing ties to Young Slime Life are also quoted in the indictment, along with social media posts.

Williams has been booked into the Fulton County jail and charged with conspiracy to violate the Racketeer Influenced and Corrupt Organizations Act (RICO) and participation in criminal street gang activity.

This isn’t the first time song lyrics have been used by criminal prosecutors. In 2019, prosecutors questioned Brooklyn rapper Tekashi 6ix9ine about lyrics for his song “GUMMO,” asking if it included threats to rivals. In 2017, prosecutors tried to use Drakeo the Ruler’s “Flex Freestyle” as evidence that he conspired to murder another rapper.

Not everyone supports allowing prosecutors to use lyrics as evidence. In “Rap on Trial: Race, Lyrics and Guilt in America” by Erik Nielson and Andrea L. Dennis, rapper Killer Mike argues that rap as an art form is a safe space where raw emotions can and should be expressed.

“Left unchecked, it has the potential to silence a generation of artists who are exercising their First Amendment right to express themselves,” he wrote. “These are voices we should be encouraging, yet our criminal justice system has consistently looked for ways to punish them.”

Killer Mike also noted that other artists from genres other than rap are often celebrated for their dark lyrics, while rappers are vilified.

Last year, state senators in New York introduced the bill “Rap Music on Trial,” which would prevent art — including song lyrics — from being used as evidence in criminal cases. Jay-Z, Meek Mill, Big Sean and Kelly Rowland all supported the bill, as did other musicians.

“I believe in the First Amendment; it’s one of our most precious rights. However the First Amendment does not protect people from prosecutors using (lyrics) as evidence if it is such,” Willis said during a press conference Tuesday. “In this case, we put it as overt and predicate acts within the RICO count because we believe that’s exactly what it is.”