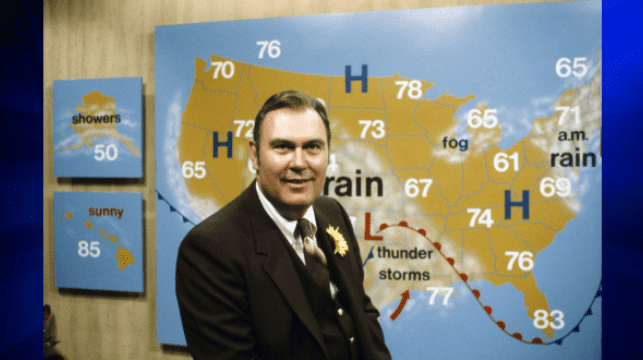 (CNN) — Willard Scott, former longtime weatherman for ‘Today,’ who was known for his outgoing, jovial personality, and for celebrating the lives of viewers who had reached their milestone 100th birthdays, has died, according to the NBC show. He was 87.

The show said Scott died this week, according to fellow weatherman, Al Roker.

“We lost Willard Scott,” Roker wrote on Twitter. “Passed peacefully at 87 surrounded by family, including his daughters Sally and Mary and his lovely wife, Paris. He was truly my second dad and am where I am today because of his generous spirit. Willard was truly a broadcast #icon.”

Tributes to Scott poured in from former colleagues and friends following news of his death.

“My longtime friend in the DC bureau, a ray of sunshine no matter what the weather or how grim the news,” NBC News Chief Washington Correspondent Andrea Mitchell said on Twitter. “Beloved by fans and colleagues alike.”

Former ‘Today’ co-host Katie Couric shared on Twitter she was “heartbroken” to hear the news.

“He played such an outsized role in my life & was as warm & loving & generous off camera as he was on. Willard, you didn’t make it to the front of the Smucker’s jar but you changed so many lives for the better,” Couric said.

Scott retired from the morning program in 2015 after 35 years, the show had said back then.

A Washington-area native, Scott started with NBC’s Washington radio station WRC in 1950 as a page and through the years was a radio host, a children’s television character, a local weather forecaster and a ‘Today’ mainstay.

He was also Ronald McDonald for several years.

“No broadcaster was loved by so many and brought so many smiles,” Roker wrote on Twitter.