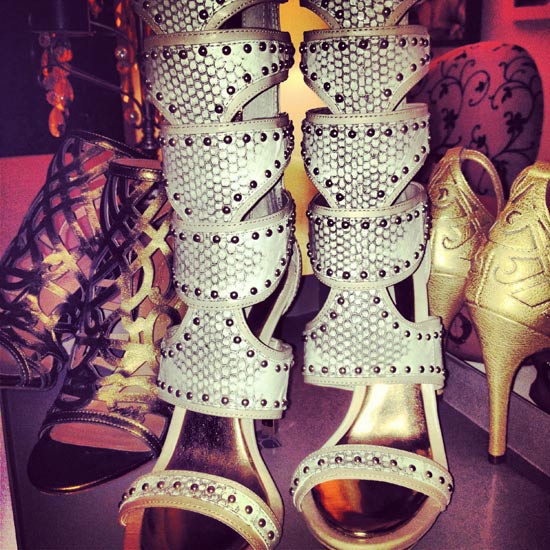 The Gallant Gladiator
a blog story…

I know it didn’t happen in slow motion but it felt that way. My feet danced around me; forward and backward, up and down, side to side. My body lunged in different directions, twisting and turning, in what I thought was a dazzling display of agility. So, imagine my surprise when my enemy sunk her dagger straight into my heart. I gasped in pain and my body grew limp. After she stabbed me, she pulled me close and whispered: “Rest in peace Gallant Gladiator.”

As I fell to my knees, the crowd roared with excitement. I could hear the stadium rumbling in the distance but the majority of the sound got stuck in the thick of my throat. My stark white toga, draped on my body to perfection, became disheveled and streaked with bright red blood. The crown of braids, delicately laced with golden leaves in my hair, suggesting royalty – fell loosely down my back, like little peasants unable to find their way home. My face lost its expression and unceremoniously, I hit the ground. I died on a Tuesday. Kind of.

A few hours earlier, my enemy and I had been chosen to fight to the fashion death in something called The Life Lottery (TLL). The match was set to take place at the Cosmic Coliseum. When I arrived at the venue, organizers were blaring Bob Dylan’s “Boots of Spanish Leather” from the loud speakers. I guess it was to set the mood. It filled my head with dreary metaphors. I tried blocking it out, but the song was on shuffle – repeat. You’re probably thinking: “That doesn’t make sense,” but it does – because it’s the future. 3012 to be exact. Humans live on other planets and stories of old are new again. Mainly, because the past is a better place to live than the present. Life is sterile now, never-changing; we don’t age, we don’t die (unless we choose to.) We just are.

The current fad of TLL, at least in the last few centuries (to kill time and avoid overpopulation) is to recreate different parts of history. Mostly from the BOE (Back On Earth) days. This time around, we’re acting out scenes from Ancient Rome, The First Century. The event is comparable to the Sci-Fi novel-turned-movie, The Hunger Games, with a few exceptions; currently, there’s no Reality television andPlanet Earth doesn’t exist.

It was destroyed during the 21st century, now known as The Glamorous Age (the third millennium). It was a time when good movies, music, fashion and food were enough. Then, humans didn’t understand how fragile they or their planet were. They imploded it with their own self indulgent behavior. It was captured moment by moment, in detail, on something called Social Media. The planet combusted in its own vanity. It was said to be a government conspiracy. While everyone focused on themselves (posting selfies) a top secret international intiative was formed called OE – Operation Elsewhere. OE’s main mission was to make human life sustainable in other parts of the Galaxy before Earth destroyed itself. OE accomplished its mission. I’m living proof.

To a certain extent, TLL is our form of entertainment. You’re chosen for the Lottery because of your Lineage. Mine goes back to The Glamorous Age, The Golden Age & The Age of Augustus. My ancestors (dating back to Roman times BOE) were all known for their individual style. Although I was born of the same trait and am considered Royalty, in this day and age, Galaxy law requires uniformity and being fashion forward is frowned upon – unless you earn it. Every five years, the living descendents of the most famous fashionista blood lines to ever exist, compete to express their own genetic uniqueness. This year, there are 10 of us. Each of us are given names to reflect our heritage. I’m known as The Gallant Gladiator.

Knowing my Lottery match could be my last fashion statement (ever) I chose to dress with timeless elegance. You can never go wrong with a Grecian-slash-Roman inspired toga dress. I wanted to come off as cool, comfortable and classy. I adorned my hair in braids, with gold leaves and ribbons, because intricate summer hair-do’s suggest a relaxed regalness. I dripped myself in bold jewelry, to offset the romanticism of it all. Wearing your strength in a subtle way is always powerful and you can do that with metal collar cuffs; around your neck and wrists. Last, but never least, my Gladiator Sandals. The look has been passed through generations. The leather bound, laced-up, bedazzled, barefoot-like shoe, will give your legs limitless comfort and style.

As I gracefully stepped inside the ring – Gypsy June, my lottery match, awaited me. We locked eyes and immediately, I knew what she was thinking. We can read minds in the future. Her thoughts: “My Gypsy look is soooo last summer and I need a pair of Gladiator Sandals STAT.” What I didn’t realize was, she wanted mine (we were the same size.) That’s when her dagger found my heart. That was last Tuesday.

The great thing about TLL is when you lose you really win. But you don’t find that out until *after* you bite the dust. When your spirit leaves your body, the Galaxy Gods greet you on the other side of Virtual reality. They explain you’ve achieved the highest, most honorable plane of human awareness (spiritually, emotionally and physically) because when you die fighting for what you believe in and what you love, your legacy lives on forever – fashionably, of course.

Go to where the stars burn brightest – with this Summer’s must have Gallant Gladiator (a blog story) look, including: dresses, shoes and jewelry at

http://www.bcbg.com It’s a style that’ll keep you traveling through space and time, without an expiration date.