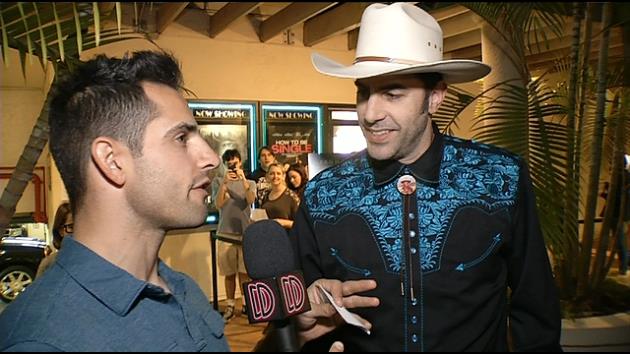 This weekend, Sacha Baron Cohen brings another crazy character to life in "The Brothers Grimsby," and he was in Miami chatting with Deco’s crazy character, Chris Van Vliet. The "Ali G Show" and "Borat" star talked about the challenges of starring in an action movie, or at least a comedy with all of the elements of an action movie.

In "The Brothers Grimsby," two brothers are separated as kids and grow up living very different lives. One becomes a spy, and the other, well, he’s this guy, and his name is Nobby.

They reunite after 28 years and end up on the run after a mission goes terribly wrong.

Chris Van Vliet: "Is it more fun to do something scripted or something unscripted like Brüno, Borat, Ali G?"

Sacha Baron Cohen: "Well, this is kind of a mixture between the two. There’s a script, but it’s loose, and it’s in a sort of Jason Bourne action scenario. So we’ve got an amazing action team we’ve got together. We’ve got this incredible new style of action which is all done with a GoPro on your head."

There’s a lot more action than you might expect, but what you can bank on are jokes on the verge of being inappropriate. And then there’s the stuff we absolutely can’t show you on TV.

Chris Van Vliet: "Without giving too much away, what are some of the elements we will see in those scenes?"

Chris Van Vliet: "And they’ll be together in this scene."

Sacha Baron Cohen: "Well, I can’t give away anymore."

Chris Van Vliet: "Don’t want it to be a spoiler, right?"

But before you see the movie, Sacha has some words of advice for you.

Sacha Baron Cohen: "I hope you’re all over 15, and I hope you’ve signed a disclaimer saying you’re not going to sue me."

If you’re looking at Nobby there going, he kind of looks familiar, Sacha apparently based Nobby’s style on Liam Gallagher from the band Oasis, although Sacha told Chris Liam stole the look from Nobby.