Tag is a game for kids — and for adults who want to keep their childhood friendship going. That’s what’s going down in the new, star-studded movie “Tag.” Deco’s child-at-heart Chris Van Vliet spoke with the comedy’s cast.

A wise man once said, “We don’t stop playing because we grow old, we grow old because we stop playing.” (Getting all philosophical on you!) The new movie “Tag” looks at a group of friends who never stop playing — and I hung out with them Monday at FunDimension in Wynwood.

Ed Helms (as Hoagie): “Our group of friends has been playing the same game of tag for 30 years.”

That’s “Tag” in a nutshell. No matter what’s going on in their lives, for one month every year, this group of friends gets together to play tag.

Jeremy Renner (as Jerry): Never been tagged, just sayin’. So who’s it?”

Jeremy Renner, Jon Hamm, Ed Helms, Hannibal Buress and Jake Johnson star in the movie, but when they got to Miami on Sunday, they played a different role — wedding crashers at the Fontainebleau. 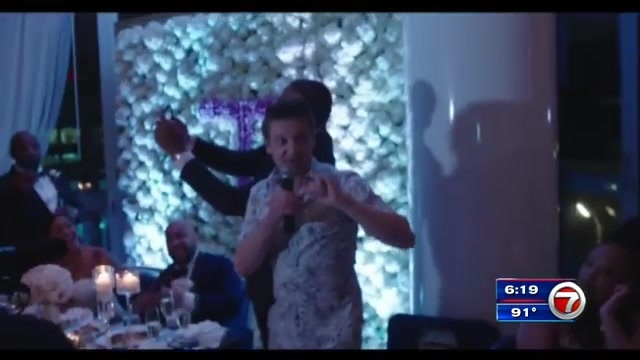 Jon Hamm: “We were having some dinner there and thought it might be fun to go say hi to our neighbors who were having a wedding.”

Jeremy Renner: “Yeah, yeah, it worked out alright, though.”

A wedding is the perfect setting, because it’s at the center of what’s going on in this movie. Jeremy Renner’s character has never been tagged, so the guys plan to finally get him at his wedding.

Chris Van Vliet: “On the surface, a movie about playing tag doesn’t seem that exciting. How did you guys do it? How did you make this fun and funny and entertaining?”

Jake Johnson: “Well, we disagree with your comment, is how we did it.”

Chris Van Vliet: “Well, there it is. This interview’s over!”

Jake Johnson: “For us it was that it was based on a true story. It’s made it seem really fun.”

Jake Johnson (as Randy): “I think your dad would have really wanted you to be it.”

And apparently, tag can be a pretty dangerous game, too, at least for Jeremy Renner.

Chris Van Vliet: “Did you really break bones in the film?”

Jeremy Renner: “I really broke two bones. (shows arms to Chris) This one and this one.”

Ed Helms (as Hoagie): “Our buddy Jerry is the best that ever played, and now he wants to retire.”

Chris Van Vliet: “Who is currently it, by the way?”