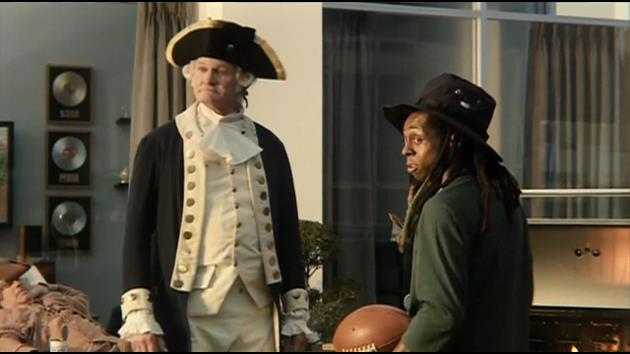 Animals, celebrities, and Scott Baio all made appearances in this year’s Super Bowl commercials. Here’s a look at some of the ones we’re still talking about even after Peyton finished his Budweisers.

Commercials gave fans a breather. The first ad came from Michelob ULTRA, and there were plenty of animals. Then there were talking bears from Hyundai, a marmot, and even a monkey-baby-pug hybrid for Mountain Dew. (We’re still not sure what that’s about.)

But it was the parade of celebrities that marked some of the big winners.

Willem Dafoe channeled his inner Marilyn Monroe, and Eugene Levy popped up as well. Arnold Schwarzenegger was in a spot for the video game "Mobile Strike," and even Star Trek’s George Takei was in a spot.

Then, comedian T.J. Miller got attitude from a beer, a bride recreated "The Catch" with Odell Beckham Jr., and Jeff Goldblum and Lil Wayne were movin’ on up.

And if you’ve been missing Scott Baio, it’s because he was abducted by avocado-loving aliens in an ad!

But the one we may be talking about for a few days is the ad on the Doritos-loving fetus. A dad snacks during an ultrasound and the baby knows it, so he and decides it’s time to make an entrance.

And all those ads were just in the first quarter!

Then, Seth Rogen, Amy Schumer and Paul Rudd tried to unite America through beer, and Steve Harvey poked fun at his Miss Universe flub in a T-Mobile ad.

Later on, Steven Tyler had a disturbing Skittles portrait, Ryan Reynolds starred in an ad — with himself — and Miami Dolphins legend Dan Marino got into a war of words with Alec Baldwin.