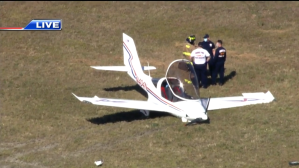 You might not know this, but there are actually five seasons in a year — spring, summer, fall, winter and pumpkin season, which is happening right now.

We found some SoFlo restaurants that are spicing things up.

You can almost smell it: Pumpkin spice, and restaurants like Casa Sensei on Las Olas are now serving this special taste of the season.

Jessica Allen: “Being able to offer something that brings that autumn feeling when you drink it was the whole idea behind making the Sensei Spice cocktail.”

The Sensei Spice is a twist on a classic martini with real pumpkin, along with cinnamon and pumpkin spice syrup.

Jessica Allen: “It really brings a smooth pumpkin spice drink to a martini, and who doesn’t love a nice cocktail?”

Alexandra Vojtila: “I’m from Connecticut. now living in South Florida, you miss that fall feeling. This drink is so good. It’s cozy, it gives you that sense of home.”

Giovanni Fesser: “I pictured myself as a kid in the bakery eating the same ones, and I always thought, even back then with my friends, ‘Why aren’t there different ones?'”

Giovanni Fesser: “Anything you put differently inside a pastelito, I think people are gonna gravitate towards that. They’re gonna wanna try it at least once.”

Angela Locarno: “This is definitely innovative to put it in a pastelito. The cream cheese was really creamy and the pumpkin tasted like fall. It was really great.”

Puffles in Hollywood is spicing up the dessert scene.

Caleb Deng: “Fall is our favorite season, so at Puffles, we decided to create something a little more fun and festive.”

Introducing the pumpkin spice egg waffle. The base is basically a bubbly ice cream cone, made from scratch and topped with pumpkin ice cream and Reese’s Pieces.

Puffles calls it the Halloqueen.

Caleb Deng: “It’s very colorful, and it also has very strong cinnamon and pumpkin flavor to it, so if that’s something you’re into, it’s really good.”