UPDATE (WSVN) – Deputies have arrested a person in connection to rapper XXXTentacion’s fatal shooting. Click here for the latest.

DEERFIELD BEACH, Fla. (WSVN/AP) – Rapper XXXTentacion has been shot and killed in Deerfield Beach, the Broward Sheriff’s Office has confirmed.

The adult male victim has been confirmed as 20 year old Jahseh Onfroy aka rapper #XXXTentacion.

Concepción said deputies responded to a call at 4 p.m. that led them to the scene outside of Riva Motorsports near Sample Road and North Dixie Highway.

The 20-year-old rapper had reportedly been in the area buying a new motorcycle when it all went down.

According to BSO, two subjects approached XXXTentacion, and at least one of them opened fire before fleeing.

“At this point, it appears to be an apparent robbery,” said Concepción. “The two suspects fled the scene in a dark color SUV.”

XXXTentacion was rushed to nearby Broward Health North.

In a tweet posted around 5:30 p.m., BSO noted the man they discovered at the scene had died.

Neighbors in the community were shocked to hear of his reported passing.

Stephanie Martinez, a 29-year-old mother who lives in the neighborhood, was just coming back from the pool with her kids when she heard three shots. She drove to the end of the street and saw the rapper’s body in the car.

“He has his mouth open and his hand out. Two people went over and checked his pulse,” said Martinez, who also saw blood. “It’s just weird because he should’ve had security and stuff with him.”

XXXTentacion had posted on his Instagram story that he was planning a charity event this weekend in Florida. 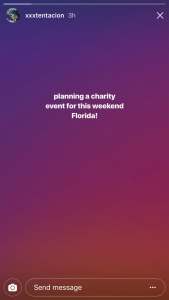 The rapper, who was born in Plantation, Florida, blew up to fame after his song “Look at Me” went viral on social media and audio distribution platform SoundCloud in 2016.

He went on to be featured on the 2017 XXL Freshman Class alongside other up-and-coming artists.

XXXTentacion notched a No. 1 album last month with his sophomore effort “?” and had a top 10 hit with “Sad!”

XXXTentacion racked up huge streaming numbers — on Spotify, his “Sad!” had more than 270 million streams and was on its Top 50 chart this week in the United States and globally. He also has several songs that have been declared platinum, including “Changes,” “Roll in Peace” with fellow rapper Kodak Black and “Look at Me!”

He was released from jail on house arrest late last year and was released earlier this year to allow him to tour.

XXXTentacion was initially one of two artists Spotify removed from its promoted playlists in May in accordance with its new policy on hateful music and conduct. But after a backlash in the music industry, Spotify backpedaled and said it would no longer attempt to police conduct and restored XXXTentacion to its playlists (although they did not do the same for R. Kelly).

A survivor of the Parkland massacre reacted to the rapper’s death on Twitter.

“This is the 18th person this year I know killed by guns,” read the post. “X, thank you for everything you’ve done for Parkland and my family and all the others. We all love you.”

This is the 18th person this year I know killed by guns. X, thank you for everything you’ve done for parkland and my family and all the others. We all love you❤️. @xxxtentacion pic.twitter.com/9TGOoSPl0P

If you have any information on this homicide, call Broward County Crime Stoppers at 954-493-TIPS. Remember, you can always remain anonymous, and you may be eligible for a $3,000 reward.