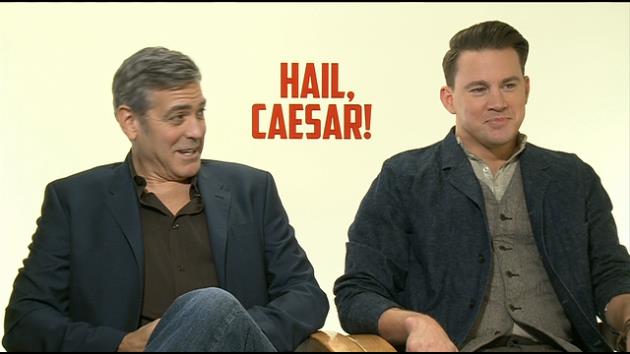 "Hail, Caesar!" is a movie, about making a movie in the Golden Age of Hollywood. George Clooney plays Baird Whitlock, an actor probably as George is. It’s the fourth movie he’s done with the Coen brothers, and they seem to have to figured out how to make parts for him.

Chris Van Vliet: "George, the Coen brothers say they like to write these ‘semi-idiotic’ characters for you."

George Clooney: "Semi? Well, I will say this: There is that moment when they send you the script and go, ‘We’ve written this with you in mind,’ and I’m like, ‘He’s an idiot,’ and they’re like, ‘Yeah.’ Oh, all right. Fair enough.’"

When George’s character gets kidnapped from the set, it’s up to the movie studio head, played by Josh Brolin, to find him.

Chris Van Vliet: "Would you like your career better now or set in old Hollywood?"

Josh Brolin: "Old Hollywood was hard, man, and that was a whole different business. I think the mentality of old Hollywood I would have dealt with fairly well, because I don’t seem to understand the rules very well."

The movie has a who’s-who of today’s Hollywood stars: Along with George Clooney and Josh Brolin, there’s Jonah Hill, Channing Tatum, Tilda Swinton and Scarlett Johansson.

And you’d think with all of those A-listers in one place, George Clooney might use the opportunity to pull one of his famous pranks.

Chris Van Vliet: "Did you pull any pranks on this set?"

Chris Van Vliet: "And what was under the skirt?"