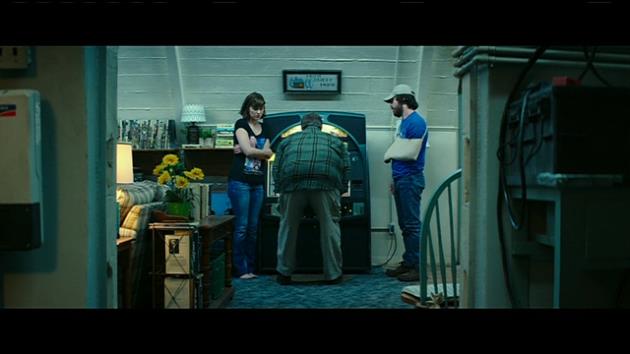 Sometimes it’s hard living with family, so can you imagine trying to live with a stranger? Well — that’s the premise behind "10 Cloverfield Lane." The movie shows us how three strangers cope with being locked in an underground shelter while a mysterious attack is killing everyone around them.

If you haven’t been invited over — don’t knock at "10 Cloverfield Lane" — because John Goodman won’t let you in.

He’s already got two guests staying in his underground sealed bunker that he built for the end of the world.

John Goodman: "He strokes his own furnace with fear, and out of that preparation survival… and I think he’s obviously got a few wires crossed in his brains."

John Gallagher Jr. moves in when a supposed chemical attack wipes out the world’s population.

John Gallagher Jr.: "What I liked about the character was that, he’s kind of the peacekeeper. He’s like, ‘Hey, maybe the world might have ended up there but we’re trapped down here so let’s kind of make the best of it.’"

And Mary Elizabeth Winstead wakes up chained in the basement after John Goodman rescues her from a car accident.

Mary Elizabeth Winstead: "I think that the film sort of plays with that in terms of the expectation of who is he and can we trust him or not. Ultimately I think it becomes clear that he’s got some motives that are maybe a little bit sinister."

A game of cat and mouse plays out in the movie as Mary tries to survive and figure out John Goodman’s real agenda.

Mary Elizabeth Winstead: "He’s not the best person person to be stuck in a bunker with. He’s a little bit scary, and you kind of don’t really know if your fate is better with him or better with whatever lies beyond."

Unlike other movies that crank up their advertising to create a buzz, producer J.J. Abrams kept this film under wraps hoping to build suspense.

J.J. Abrams: "The movie feels like it’s this project that’s been worked on in secret, and it allowed us to sort of surprise audiences."

John Gallagher Jr.: "I’m into the secrecy that has surrounded this film. There’s this formula now where you have to drop a trailer six months before the movie, and then you gotta keep them coming. By the time you get into the the movie, you’ve seen a lot of the movie."