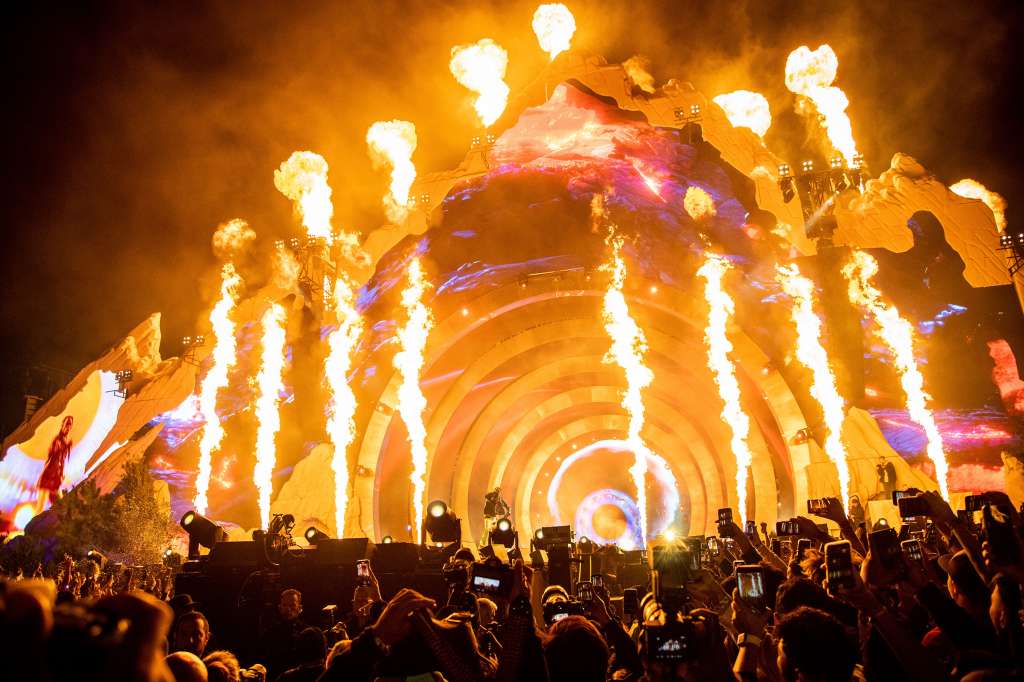 Travis Scott performs at Day 1 of the Astroworld Music Festival at NRG Park on Friday, Nov. 5, 2021, in Houston. (Photo by Amy Harris/Invision/AP)

(CNN) — A lawsuit has been filed following the Astroworld Festival tragedy that left eight people dead and dozens injured in Houston on Friday night.

A concertgoer who was injured during the festival is suing rapper and producer Travis Scott, who was the organizer of the Astroworld Festival, as well as entertainment company Live Nation, concert promoter Scoremore and others involved in the event, according to the lawsuit obtained by CNN.

Manuel Souza, who is being represented by the law firm Kherkher Garcia, “suffered serious bodily injuries when the uncontrolled crowd at the concert knocked him to the ground and trampled him,” according to the lawsuit filed in Harris County, Texas.

“Defendants failed to properly plan and conduct the concert in a safe manner,” the lawsuit continued.

“Instead, they consciously ignored the extreme risks of harm to concertgoers, and, in some cases actively encouraged and fomented dangerous behaviors. Their gross negligence caused Plaintiff serious injuries.”

A jury trial is preferred to determine the exact amount of damages, according to the lawsuit, but Souza is seeking “monetary relief of over $1,000,000.”

CNN has reached out to Scott, Live Nation and Scoremore for comment on the lawsuit.

“Heartbroken for those lost and impacted at Astroworld last night,” Live Nation, the company responsible for organizing the Astroworld Festival, said in a statement. “We will continue working to provide as much information and assistance as possible to the local authorities as they investigate the situation.”

Live Nation is a concert promoter, venue operator and the owner of Ticketmaster. According to its website, it sells 500 million tickets to concerts and festivals each year.

The timeline of events on the evening of the tragedy

The Friday night crowd at the sold-out Astroworld Festival was so tightly packed that when audience members were pushed toward the stage, some told CNN, they were crushed to the point that they couldn’t breathe and passed out.

Concertgoers described the event as traumatizing, with many witnesses saying they saw lifeless bodies being trampled amidst the chaos. Those who survived had to fight their way out of the crowd as the music continued.

Scott took the stage for his set shortly after 9 p.m. Officials said they were made aware of crowd surges early in his set, and received the first reports of injuries at approximately 9:30 p.m.

It is unclear what Scott saw from the stage and whether he was aware of the crowd conditions at the time, but he continued to perform until approximately 10:10 p.m. That is about 40 minutes after the first reports of injuries were made to officials and just over 30 minutes after officials declared the concert a “mass casualty event,” according to times given by Houston Fire Chief Samuel Peña at a news conference Saturday morning.

Video from the concert’s livestream also showed Scott pausing his performance and looking on in apparent confusion as an ambulance pulled into the crowd. He began performing again, but later stopped the concert.

“I’m honestly just devastated,” Scott said as he repeatedly sighed and rubbed his forehead. “We’re actually working right now to identify the families so we can help assist them through this tough time.”

Some concertgoers have criticized organizers for continuing the show even as unresponsive people were being given CPR and carried away, but Scott indicated he was not aware of how severe things had gotten. “Any time I could make out, you know, anything that’s going on, you know, I just stopped my show and, you know, helped them get the help they need.”

The Houston Police Department tweeted Sunday the investigation into the tragedy is active and “in its early stages.”

The lawsuit alleges, “Scott actively encourages his fans to ‘rage’ at his concerts. His express encouragement of violence has previously resulted in serious violence at numerous past concerts.”

It also cites a since-deleted tweet from Scott in response to fan complaints about this concert’s quick sell-out: “WE STILL SNEAKING THE WILD ONES IN. !!!!!”