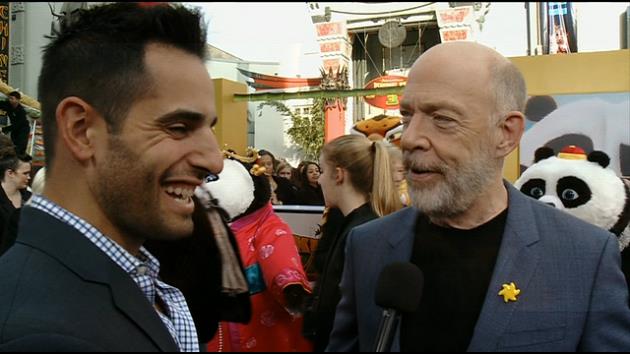 Back here in the U.S., the red carpet was rolled out in Hollywood for the world premiere of "Kung Fu Panda 3." Who better to cover it than Deco’s own kung fu and panda expert, Chris Van Vliet? It’s not always the easiest to get interviews on the red carpet when it’s so packed with people, so thank goodness for those kung fu skills."

The red carpet was rocking in Hollywood for the world premiere of "Kung Fu Panda 3." Jack Black is back, lending his voice to everyone’s favorite panda, Po.

Po is reunited with his biological father, voiced by Bryan Cranston, much to the dismay of the man, or goose, that raised him. James Hong plays that goose, named Mr. Ping, and there’s no question he won "best dressed" with his outfit at the premiere.

Chris Van Vliet: "These are noodles on top of your head?"

James Hong: "They are delicious noodles that I made myself. Secret ingredient, with the soup, of course. You can see the soup, right?"

Chris Van Vliet: "I can see, so if at some point on the red carpet you get hungry, you can just dive right in?

Po faces his toughest mission yet. He has to battle a supernatural warrior named Kai, voiced by J.K. Simmons.

Chris Van Vliet: "What did you do to find that voice that you use in the film?"

J.K. Simmons: "I just slept in and went to the session without warming up or anything, so I was just low-voiced and crabby."

Of course, Po can’t do it alone. He has his warriors, the Furious Five, to back him up. Angelina Jolie is playing the role of Tigress for the third time, and says this voice work thing, it’s not so bad!

Angelina Jolie: "It’s a lot easier and it’s much more fun. I have gone in my pajamas, yes."

Dustin Hoffman on the other hand, sees it for what it is.

Dustin Hoffman: "I wouldn’t say it’s fresh every day, nor would I call it fun. I would call it work!"

Whatever you want to call it, "Kung Fu Panda 3" delivers the same fun as the first two movies.

"Kung Fu Panda 3" is in theaters on Jan. 29. The movie marks a first for Jack Black’s 9-year-old son, Sammy, who makes his cinematic debut in the film as the voice of a bunny.