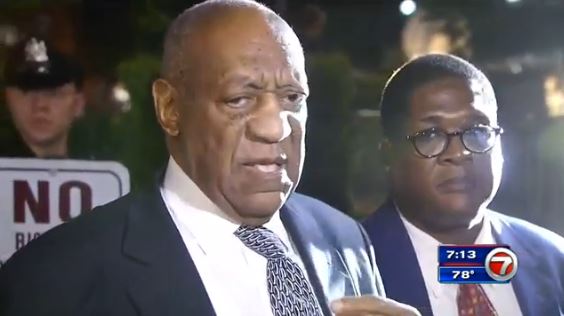 NORRISTOWN, Pa. (AP) — Prosecutors and the defense wrapped up jury selection in the Bill Cosby sexual assault case Thursday, setting the stage for the first big celebrity trial of the (hash)MeToo era.

All six alternates — half of them black — were picked without incident after an earlier showdown over the jury’s racial makeup. Alternate jurors listen to the evidence and testimony, but do not participate in jury deliberations unless called upon to replace jurors on the main panel.

Cosby’s lawyers had accused prosecutors of discrimination for removing a black woman from consideration on the main jury of 12 that will decide the 80-year-old comedian’s fate.

The district attorney’s office rejected the allegation, noting that prosecutors had no objection to seating two other black people on the jury. The other 10 jurors are white. There are seven men and five women.

Opening statements are scheduled for Monday in a trial that’s expected to last a month.

As he left the courthouse, Cosby thanked a woman who wished him good luck. His spokesman, Andrew Wyatt, urged jurors to remain “fair and impartial,” adding, “We would want them to erase everything they heard outside this courtroom when they come in for Monday.”

Cosby faces three felonies stemming from allegations by a former Temple University women’s basketball administrator who says Cosby, a Temple alum and longtime trustee, gave her pills that made her woozy, then assaulted her at his home in the Philadelphia suburbs in 2004.

Cosby, once revered as “America’s Dad” for his family sitcom “The Cosby Show,” says the encounter was consensual.

The first alternate picked Thursday, a middle-aged black man, said he could set aside what he’s heard about the Cosby case but hesitated and couldn’t guarantee it when pressed by the judge. Prosecutors and Cosby’s lawyers nevertheless found him acceptable.

A middle-aged white woman also picked as an alternate said she could put aside her thoughts that Cosby, who is black, is guilty.

Judge Ann Butchart on Tuesday dismissed the lawsuit against Andrea Constand and two of her lawyers by Bruce Castor Jr. He claimed Constand and her lawyers harmed his reputation and cost him a chance to return as district attorney by criticizing him and suing him for defamation days before the 2015 election.

Castor was district attorney in 2005 when Constand first told police Cosby had drugged and molested her. Castor ended his investigation into Cosby after four weeks, announcing the comedian wouldn’t be charged because the evidence showed both parties “could be held in less than a flattering light.”

A new district attorney reopened the case in 2015 after Cosby’s deposition in Constand’s lawsuit was unsealed at the request of The Associated Press. Cosby gave the deposition in 2005 and 2006 as part of Constand’s suit against him.

Castor’s lawsuit said Cosby paid Constand “well into the millions of dollars” in a settlement.

The Associated Press does not typically identify people who say they are victims of sexual assault unless they grant permission, which Constand has done.