Japanese Plates with a Twist at Azul and Ichimi 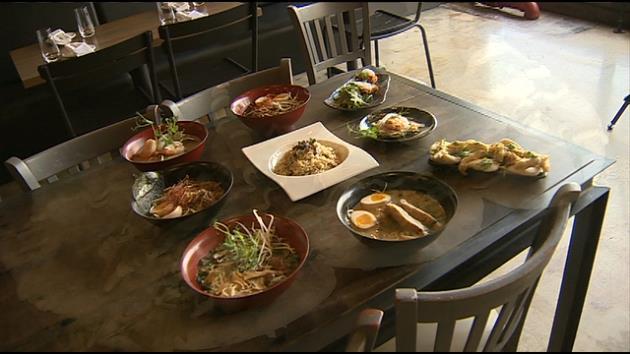 Japanese food is more than just sushi. Deco’s Chris Van Vliet went into the kitchen at some Miami hot spots to see how they’re taking Japanese food to the next level.

Azul inside the Mandarin Oriental on Brickell Key is putting their spin on the Japanese tradition of Izakaya Nights. Izakaya, fun word to say. Am I right?

Chris Van Vliet: "Izakaya is a term I’ve never heard before. What exactly is this?"

Chef Ben Murray, Azul: "Izakaya is a shareable cuisine found in Japan. Typically, if you go to a bar at night with your co-workers or friends, you’re going to get some sharable plates. So we’re doing that, but it’s our modern take on it."

It’s happening every Thursday night until the end of March. $55 per person gets you five courses from their shareable menu that changes every week.

Chef Ben Murray: "I’m actually from Japanese heritage, so my mother used to make some of these dishes that we’re producing here, but we’re elevating it to a new modern level."

I wanted to see what this new modern level Chef Ben was talking about, so we headed into the kitchen.

Chef Ben Murray: "So we’re going to be making a chirashi don, which is basically a typical Japanese rice bowl."

We start with the tuna sushi, season it, then…

Add some veggies marinated in sesame, soy sauce, and ponzu. And then the fun begins.

Chris Van Vliet: "What is this? Foamy!"

Chef Ben Murray: "It’s light. It looks like a lot of food, but it’s really not."

You can also savor some food from the Far East at Ichimi in Coral Gables.

Constantine De Lucia, Ichimi: "It’s my interpretation of a Japanese ramen house. I was looking to fit the palate of the East and West together and make it comfortable for everybody."

This ramen restaurant serves up oodles of noodles.

Constantine De Lucia: "It’s not top ramen; it’s another level. It’s ramen the way it’s supposed to be, that people should be eating."

Ichimi is serving the freshest ramen in town, so fresh you can watch them make it!

Constantine De Lucia: "The people who developed this machine put 1,000 years of noodle making and put it into a box."

They have one of only 10 ramen noodle machines in the U.S., and it can make 200 orders of ramen an hour.

Constantine De Lucia: "The product this creates is heavenly. I’ve been dealing with pasta my whole life. This is unbelievable."

The noodles are mixed with different broths, served hot or cold with veggies and proteins like brisket or seafood.

Constantine De Lucia: "It’s my version of a scampi."

If you aren’t saying rah-rah for ramen, check out the "Uni-taco," served on a fried radish leaf, as well as the fried rabbit or the risotto.

Constantine De Lucia: "We do Japanese food. We mix a little bit of traditional with some new tech. A lot of Italian influences involved with it."

Constantine De Lucia: "We use a lot of the same ingredients we do in Italy as they do in Asia."

From fresh buns to small plates — and, of course, the ramen — there’s something for everyone.