Interview with the cast of ‘Batman v Superman: Dawn of Justice’ 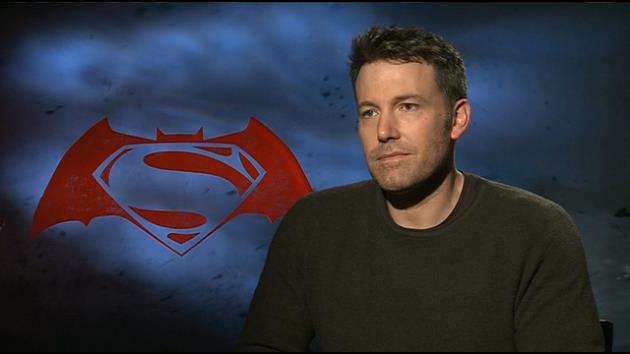 Ever since the movie was announced, there have been all kinds of questions like, "Why are Batman and Supes so mad at each other?" and fans asking, "Why they would cast Ben Affleck?" I flew to L.A. to ask those very questions, and yeah, Ben knows that you didn’t like him.

Oh, but they care about Superman taking on the Batman. It’s an epic battle, decades in the making… but I know what you’re thinking… ‘why would two superheroes want to fight each other?’

Zack Snyder: "From Superman’s point of view, it’s like, ‘There’s laws and there’s courts and stuff. You can’t just grab a guy and decide he’s guilty.’ And from Batman’s point of view, he’s like, ‘Look, what if you just decided tomorrow to fly into Washington D.C. and kidnap the president? There’s nothing we could do.’"

Batman and Superman are very much aware of each other, but they don’t exactly trust each other. Henry Cavill who plays Superman understands why.

Ben Affleck gives Batman a new look and a new feel– and knows that fans didn’t like him being cast in the role.

Chris Van Vliet: "When you were first cast in the movie, there was a lot of backlash from fans before you had even filmed one frame. What was your reaction to seeing that?"

Ben Affleck: "We didn’t do this sort of down the middle, straight ahead version of Batman, which I probably wouldn’t have been right for, but instead did this other thing which is a more sideways take on it and you can’t go around explaining that to everybody."

"Batman v Superman" is tracking to be the biggest release of the year so far– but one person who has no plans to see it is Jesse Eisenberg who plays Lex Luthor. He says he hates watching his own movies.

Jesse Eisenberg: "It’s like if you ever hear your voice on the answering machine and you’re like horrified for the day, so you multiply that by a million."

Chris Van Vliet: "But it’s what you do for a living though."

Jesse Eisenberg: "No, I don’t watch movies for a living, I just be in them. So I’m not required to look at them ever. In fact, I’m like probably the only person that doesn’t have to watch them because I already know what happens."

Even without Jesse Eisenberg in attendance, "Billionaire v Journalist" as I like to call it, is tracking to make north of $150 million this weekend, beating out "Deadpool" as the biggest opening of the year.