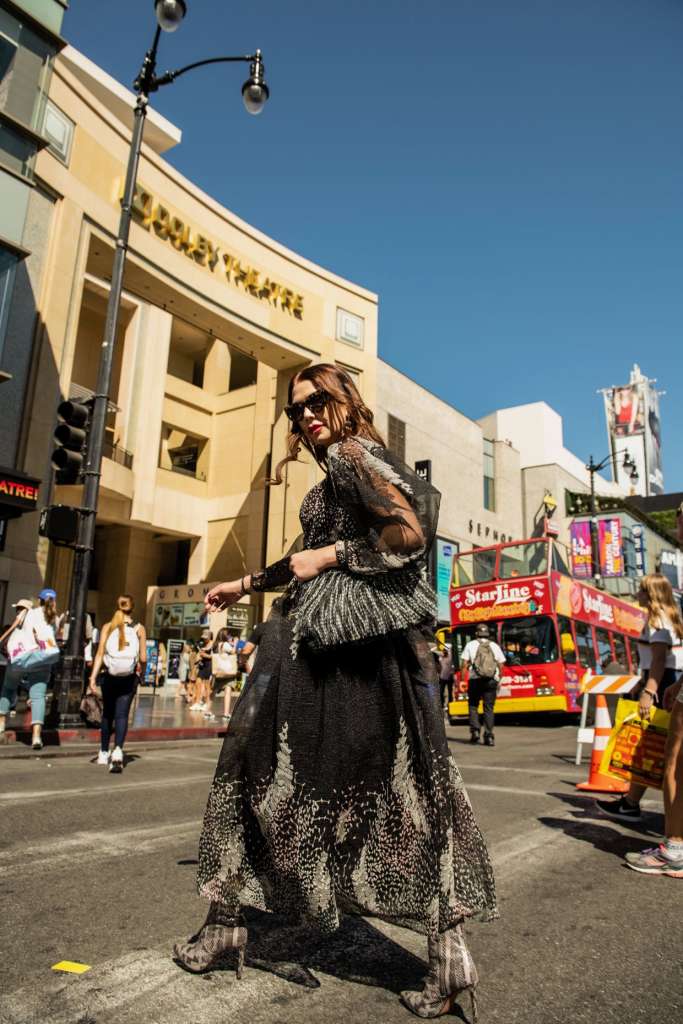 What:
A quick trip to Hollywood to interview the cast of the new movie, “Bad Times At The El Royale” and #WhenInRome, a fashionista has to get glammed up to go sightseeing, shopping and spend time at the first place to ever host the Academy Awards. #AndTheOscarGoesTo…..

Why:
I haven’t been to my old stomping grounds, a.k.a Hollywood, in four years. After getting promoted to Co-host of Deco Drive, my #JetSetLife came to a well-deserved end. l hate to admit it, but after zigzagging the globe for almost two decades, I had grown tired of life on the road and was ready for a new challenge. Of course, that doesn’t mean I don’t miss interviewing the word’s biggest stars in fabulous far away places. I actually do — sometimes.

So, when my Assignment Editor, Odette, asked if I wanted to attend a press junket for “Bad Times At The El Royale” in Los Angeles — I was game. Not only would I get to interview the cast of the movie, I’d get to do a fashion blog, too. #SignMeUp Sweetening the deal was a weekend stay at The Hollywood Roosevelt, which happens to be where the very first Academy Awards were held in 1929. 🎬

While LA hasn’t changed much, movie making sure has, or at least the kind of movies Hollywood is generating nowadays. If it’s not a superhero bonanza, it’s a blanket comedy or a cheesy romcom, which makes “Bad Times At The El Royale” all the better: it’s original, unique & provocative. In fact, I’ve never seen anything like it in all my years as a movie critic. Set in the 60’s…

The story centers around 7 very different people who are drawn to a mysterious hotel called the EL Royale. As each character checks in, you learn their “surface” backstory and how, coincidentally, they’re all looking for some kind of redemption. You know, like righting a personal wrong. The beginning of the movie starts with lighthearted tongue-in-cheek banter, subtlety hinting at the craziness to come and boy, does it ever…

As night falls on the El Royale, a suspenseful thriller is born with more twists and turns than the Kingda Ka at Six Flags in Jersey. Btw, Kingda Ka is said to be one of the scariest roller coasters in the world. 🎢😱 And all those surface backstories I mentioned boil over like a messy pot of overheated turkey chili (turkey chili happens to be my favorite. I eat it with extra cheese and sour cream) 🤓…

So, what’s the movie ultimately about? Don’t think this is a cop-out, but it’s a matter of personal interpretation. #GoodVersesEvil #Perspective #Perception #NothingIsAsItSeems #OldHotelsCreepMeOut speaking of, eventually the El Royale reveals itself as a house of indiscretion, filled with two-way mirrors, secret rooms and buried skeletons. And you, the audience, are the ones doing the spying alongside hotel “management.” Meaning, you really get to see what’s going on in each character’s life.

The movie, which is the brainchild of writer/director Drew Goddard (best known for nail biting stories like “Cabin in the Woods,” “World War Z,” and “The Martian,”) delivers more than just a hair-raising cinematic ride… “Bad Times At The El Royale” is beautifully shot and edited and the ensemble cast is icing on the cake. Talk about acting chomps — while Chris Hemsworth is a stand-out and not just because he walks around the majority of the time with his shirt hanging off (okay, maybe that helps a little,) newcomer Cynthia Erivo is the #bombdotcom, too…

She delivers a breakout performance as Darlene Sweet, a down-on-her-luck singer. Although Cynthia is a theater veteran, this is her FIRST feature film role and WOW, if this performance is any indication of what’s to come, she’s headed for superstar status. Her on-screen presence is electric and her singing a revelation.

I’m not gonna lie, this film heads in a direction I didn’t see coming, not by a long shot, which is kind of the point. It’s a bag of thought-provoking tricks mixed in with a little Quentin Tarantino meets Robert Rodriguez. If you’re not big on violence, consider yourself warned. It gets really ugly, really fast. I’m not big on blood and guts, but support it if done in an artistic way that enriches the story and moves the plot forward and in this case, it does both alongside delivering a shocking ending. Want more?

Check out my interviews with the cast of the movie and see my full review at DecoDrive.com  ND enjoy the blog pictures of a day well spent strolling the Hollywood Walk of Fame and shopping on Rodeo Drive — because #Movies and #Memorable places (especially where I can buy a great pair of shoes,) will always be one my Favorite Things.

Where:
I interviewed the cast at www.thehollywoodroosevelt.com
Isn’t the junket set cool?

When:
Bad Times At The El Royale opens in theaters October 12th
for more info: tinyurl.com/yd7c4czp

“It’s not the having, it’s the getting.” — Elizabeth Taylor