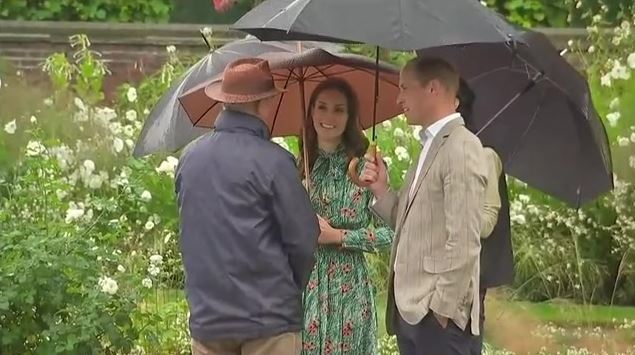 The court in a Paris suburb fined two executives of French gossip magazine Closer — owner Ernesto Mauri and executive editor Laurence Pieau — each the maximum of 45,000 euros ($53,500) for such an offense.

The Closer executives, along with two photographers for a celebrity photo agency, were collectively ordered to pay 50,000 euros ($59,500) in damages to Kate and the same amount to her husband, Prince William.

The damage award was substantially below the figure that the magazine’s lawyer said the royals had requested, but the timing of the court’s finding of privacy invasion had particular resonance in Britain.

Last week marked the 20th anniversary of the death of William’s mother, Princess Diana, who was killed in a Paris car accident that occurred while she was being pursued by paparazzi.

The royal couple did not attend the hearing where the verdict was announced. Their office at Kensington Palace said they were pleased the court ruled in their favor and now consider the matter closed.

Kate and William “wished to make the point strongly that this kind of unjustified intrusion should not happen,” the palace said in a statement.

The pictures of the duchess were taken in September 2012 with telephoto lenses while she and her husband — an heir to the British throne — were on a patio at a private estate in France’s southern Provence region.

Their publication in Closer and a French regional newspaper outraged the royal family. The Closer spread included a caption reading, “On holidays I forget everything, the London grayness, and even the swimsuit left in her Highness’ suitcase.”

Using lists of hotel customers and cellphone data, investigators found photographers Cyril Moreau and Dominique Jacovides were in the vicinity of the castle where Kate and William vacationed in September 2012. Surges in the paparazzi’s incomes were also recorded after the photos appeared in Closer.

Moreau and Jacovides, who work for Paris-based celebrity photo agency Bestimage, denied taking the most contentious pictures published in Closer. They each were fined 10,000 euros ($11,920), but the court suspended 5,000 euros ($5,958) of their penalties.

Jean Veil, the lawyer for the British royals, did not disclose how much in damages he had sought on behalf of his clients. Closer magazine lawyer Paul-Albert Iweins told reporters that the couple had requested damages worth 1.6 million euros ($1.9 million dollars.)

Iweins called the fines the court imposed “a bit exaggerated,” but said he was pleased the damages awarded were in line with similar French cases of privacy invasion.

Christopher Mesnooh, a corporate lawyer in France who often comments on the country’s legal system, said he was not surprised the court sided with William and Kate on the privacy question.

“France has very strict privacy laws. And the photographs that have been published back in 2012 in Closer magazine were clearly taken while the royal couple was on a personal holiday, so there was no way of saying that this was in a public domain,” Mesnooh said. “So it was clear that the magazine was going to be found guilty of invasion of privacy.”

Neither was Mesnooh surprised that the court awarded damages in the low six-figure range instead of “an American-style award.”

“The French court clearly decided not to award them with a million and a half, which really would have been completely disproportionate in the context of the French legal system,” he said.

Pauline Maclaran, co-author of “Royal Fever: The British Monarchy in Consumer Culture,” thinks the ruling must have disappointed the prince and duchess since the court failed to make a distinction between the rights of royalty and the privacy to which garden-variety celebrities are legally entitled.

“They would have been hoping for a much bigger sum to reflect the importance of royalty,” Maclaran said. “They just got allocated what any old celebrity would have gotten.”

Perhaps more significant, she said, is that the amount is so small that it is “a drop in the ocean. It’s not going to deter (the paparazzi) from trying again.”

French regional newspaper La Provence also published a photo of the Duchess of Cambridge wearing a full swimsuit on the same estate patio.

The prosecutor at the trial in May said that the Provence’s picture, unlike the ones in Closer, was neither “indecent” nor “vulgar,” but that it still shouldn’t have been published.