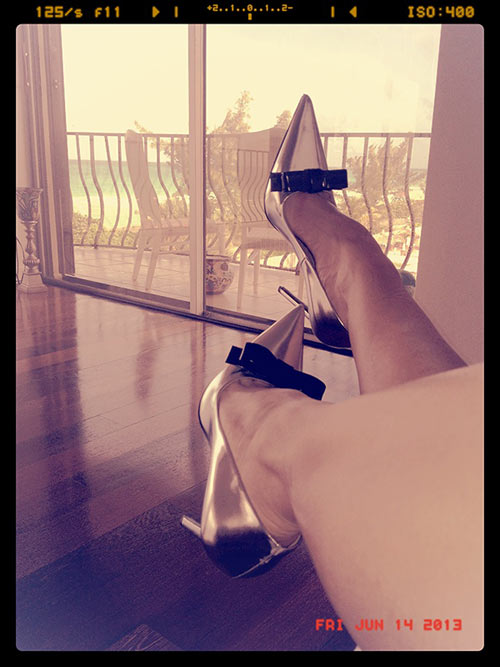 I didn’t notice him at first – but once I realized he was staring at me from across the room – I was a goner. He was beautiful. Smoldering really. Sure the place was packed, but our mutual attraction made me feel like I was the only girl in the world. He was subtle, I’d give him that and unusual. I’d never seen anything like him. Maybe a few cheap knock-off’s but for the most part, I knew I had spotted a true original. I was beyond intrigued and utterly fascinated.

As I walked closer to the table where he was sitting, Marybel and Carol, my two friends who were with me that day, blurred into the background. They watched helplessly. They knew I was smitten. I’d been hurt a lot in the past, by a string of bad mishaps – over time, things had become chipped, scuffed and completely irrepairable. They knew it. I knew it and I’m pretty sure he knew it, too. That’s probably why I thought he was the perfect fit.

Have you ever had that moment in life where there’s a before and an after? Something or someone changes you so profoundly, nothing is ever the same. For me, this was one of those moments. The draw was so powerful, so intense, I had a hard time remembering anything before. There was only after and it would always be that way now. I hate to sound dramatic but it was official; I was Falling for Winklepickers … I wouldn’t find out the name ’til later.

I extended my hand and whispered: “Hi there handsome, I’m Shireen.” I smiled and we started dancing that dance soon to be couples always do in the beginning; positioning for power, information and sexual prowessness. I thought I was winning but really, do women ever? Marybel and Carol smiled when I showed him off and insisted: “You’re making the right decision.” For the record, I always think I’m making the right decision at the time. Be still, my heart.

After a few hours of intense flirting, I gathered myself together, turned to him and said: “Do you want to come home with me?” He didn’t answer “verbally” but I knew it was a yes. We packed it up and headed to my apartment. That night, I decided on intimacy instead of passion. I wanted it to last – I was over short-lived infatuations. They always cost me so much more than what I bargained for. As a result, I lived on a strickly non-emotional budget, but at that moment, I was seeing red. I’d pay later. Literally.

We sat together, silently in my bedroom. I couldn’t stop staring, touching and feeling him. Even his smell was intoxicating. I assure you though, it was all rather innocent. He was propped up next to my pillow when I drifted off to that place reserved only for excitable girls. It was there, in my dreams, that I planned my future days and nights, all to squeeze into this gorgeous thing that had slipped into my life.

The next morning I quietly got up, brushed my teeth, poofed up my hair and put on some concealer. Before I headed to the kitchen to make coffee and finish my blog, I glanced at the goody back in my bed. I sighed with satisfaction, flipped open my laptop and immediately Googled my new friend.

Apparently, I wasn’t the first person that found myself Falling for Winklepickers. In fact, he had been seducing people for years. I can’t say it surprised me, but here’s what did – he was a lot older than I thought he was. Winklepickers were first worn as a shoe-boot by French nobility in The Middle Ages. The extreme point relaxed as centuries went by, but never really made a true comeback until the 1960’s when rockers went Mod.

Over the next forty some-odd years, the pointed shoe would rear-up its sharp head, but wouldn’t be able to stab its way into the mainstream fashion limelight, until now. That’s because the trend would go couture (now and then) leaving us common folk afraid and uncomfortable. So, we ran toward the round-toe and never looked back. Matter-of-fact, until last week, I wouldn’t be caught dead in a pair of Winklepickers. Then I met my perfect match at Saks Fifth Avenue in Bal Harbour. That’s how the love affair began.

I’d like to think it’ll last but honestly, I’m not sure how long my new Audrey Hepburn-slash-Jackie Kennedy Winklepicker pair of shoes (that look like they’re on crack) will satiate me. For now though, I can think of nothing else. I guess it is more than a one night stand. Sharpen your own fashion edges with a pointy pair of Prada’s at www.saksfifthavenue.com