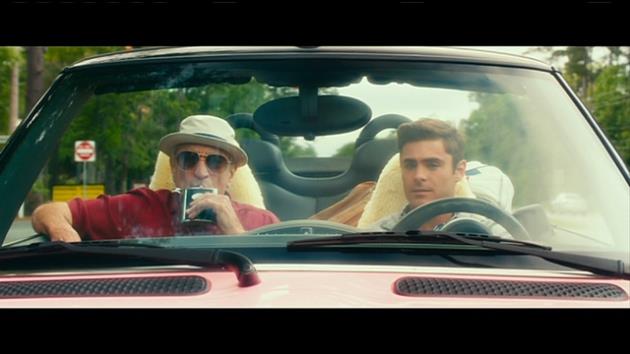 Movies about college kids going on a road trip are nothing new. Bringing Grandpa along for the ride? Now that’s different, and just what we’re gonna see in "Dirty Grandpa."

Zac Efron is Jason, a young lawyer about to marry Julianne Hough’s character, in "Dirty Grandpa."

Julianne Hough: "She is Miss Perfect, super controlling and super, super overwhelming. She’s put together, you know, but then you just see the little things come out, and it’s like she’s just bat-[expletive] crazy."

Zac Efron: "He’s a great lawyer. He’s moving up very quickly in his law firm. He has a great fiancee, and things are looking good for him. He has all the boxes sort of checked."

But when Zac’s grandma dies, Grandpa, played by Robert De Niro, needs a favor. Zac’s estranged grandpa asks him to drive him to Boca Raton.

Zac Efron: "It turns out Jason’s grandpa is not who he expects. He has a side agenda."

Call him "raging horndog." This is De Niro as you’ve never seen him before!

Zac Efron: "The coolest character in the movie by far is Dick, played by the one and only Robert De Niro. He’s such a dramatic actor. He’s such a presence on camera, and formidable and dramatic and real. And when he applies those talents and skill to comedy, the screen just blows up. It’s insane!"

Zac Efron: "I would break constantly, ’cause the stuff that would come out of his mouth was insane."

Julianne Hough: "When I first read the script, my first impression was, ‘Wow! Robert De Niro has some big [expletive], and he’s gonna take this on and like be this inappropriate.’"