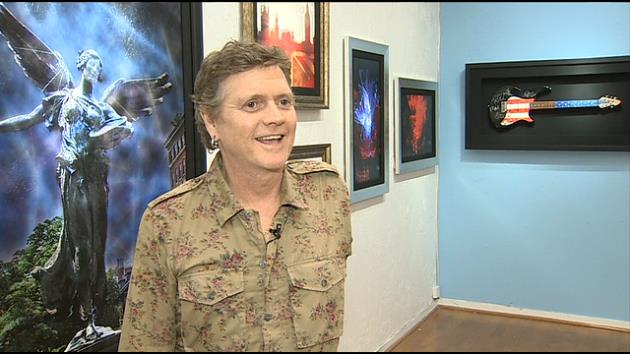 Rick Allen is known to music fans around the world as the drummer of legendary rock group, Def Leppard. Rick knows his way around a canvas, as well. He’s an accomplished artist whose paintings are currently on display in Fort Lauderdale.

Drummer Rick Allen puts his talent on display everytime he gets onstage with Def Leppard.

Wentworth Gallery in Fort Lauderdale is displaying another facet of his talent– his paintings.

Rick Allen: "You’re basically seeing my life laid out in front of you, this is pretty much everything I’ve ever experienced."

The exhibit’s called "Angels and Icons." The work represents important moments for Rick.

Playing for packed arenas is one thing, hanging your artwork in a gallery… that’s something else.

Rick Allen: "Sitting behind a drum kit, you’ve got the whole rest of the band around you, but this is like your pants around your ankles and it’s there for everybody to see."

It took a lot of guts to come out as an artist, but it was worth the risk.

Drumming or painting, in the end, the feeling’s the same…

Rick Allen: "I lose myself in it, I go to the same place when I do this as when I play music."

Rick sees his style as a mix of surrealism and 1960s pop art. It’s not something he learned in art class.

Rick Allen: "To me, not being schooled, that’s the only way I can really do this is just be inspired by other artists."

That inspiration also comes from both sides of the Atlantic. The stars and stripes, old English phone booths, even his daughter on a swing. He’s even had jewelry designed from his work.

When it comes to his night job in Def Leppard, Rick’s glad that one’s still going strong.

Rick Allen: "There are certain bands that are around at the moment and they’re wrapping it up and we’re very fortunate we’re busier now than we’ve ever been."

You can hang with Rick Allen and check out his artwork. He’ll be at the Wentworth Gallery at 819 East Las Olas Boulevard in Fort Lauderdale this Saturday from 12 p.m. to 3 p.m.