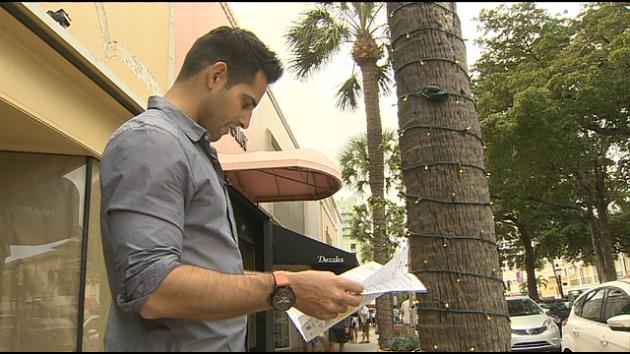 Las Olas has some of the best shops and restaurants in all of South Florida, but something’s going on up there on Thursday that’s positively criminal. Now combining criminology and cooking– it’s the man we call "Mystery Meat" Chris Van Vliet.

It’s one part murder mystery, one part pub crawl– and all parts fun. I think that’s how the math works. And it’s called Clueless.

When I say "Clueless," you probably think of the movie.

Alicia Silverstone won’t be making it to Fort Lauderdale this Thursday for Clueless on Las Olas, so I went in her place. Oh, and it has nothing to do with "Clueless" the movie.

Chris Van Vliet: "Tell me about Clueless. How exactly does this work?"

Tim Curtin, Writer of Clueless on Las Olas: "We have a murder mystery that has six suspects, all the hints and clues are up and down Las Olas Boulevard, different stores, shops, restaurants and bars."

This case is filled with a lineup of some unusual suspects…

Fystee Sparks: "Howdy y’all, Fystee Sparks here. I didn’t do it, but I might know who did."

Dante Federica: "My name is Dante Federica, and I have plenty of money and I look too pretty to commit this crime."

It’s up to you to do the detective work and crack the case.

Tim Curtin: "People search for the hints and clues. They gather them, they solve the murder mystery."

The story’s called "Lotto Demise." It’s about a guy who hits the lotto jackpot and is on the way to collect his money at the Riverside Hotel…

Tim Curtin: "Where he’s going to put that check into Bright Star Credit Union and unfortunately he doesn’t show up the day of the press conference. They find him dead in the parking lot."

There are clues in the story to help you nab the bad guy. If you get stuck, you can get extra info from a snitch on the street– but it’ll cost you.

Chris Van Vliet: "Yeah! How much?"

Then it’s on to one of the stores that’s holding a clue.

Sounds easy, but the suspects will try to throw you off your game…

Erica Sweetbang: "If you ask me, I think the guy with the gambling problem did it."

Identify the suspect, discover how the victim was offed and you win.

What’s in it for you besides a good time? Plenty.

Tim Curtin: "And it’s all they can eat and drink, as well as play."

Win the grand prize and you’ll be airborne.

The only mystery now is… who done it?

It’s $40 per person and the proceeds go to help Broward County school kids.

And if you ask me, it’s gotta be the woman with the guitar.