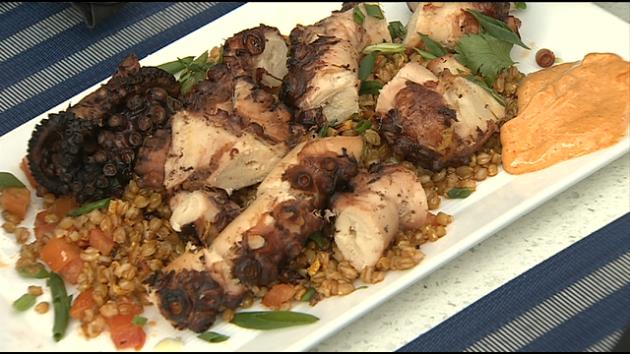 You know how carbs have been demonized by fitness fanatics? Well ladies, if you’re willing to run 26.2 miles, you can eat all the carbs– glorious carbs– you want! Deco’s got some carb-up deals before your big run.

You can have your cake and eat it too at Scarpetta in the Fontainebleau on Miami Beach with their "Carb-Up" runners’ special.

Neil O’Connell: "The carb-up meal for the marathon which really celebrates the people going for the run and eating carbs which is great for them ’cause normally you can’t eat them."

It’s three courses with choices… Try the creamy polenta with truffle mushrooms first… and don’t forget the bread! And bring on the pasta!

Neil O’Connell: "This is a short rib agnolotti dal plin. We serve it here in the restaurant with some freshly grated horseradish, bread crumbs and chives and a lovely red wine reduction."

Dig in– there’s no guilt!

Neil O’Connell: "Carbs are the building blocks of energy. They really help the body move fast."

Quattro Gastronomia Italiana has a carb loading deal too…

Alex Portillo: "Here in Quattro, we have delicious carb dishes."

And now the carbs. Risotto carnaroli, that’s rice by the way! Add in the seafood, some wrist action and voila! No scrimping– gotta fuel your muscles. Top with the other mussels and clams too.

Mare Mio on SoBe’s Española Way has a carb dish made with an ancient grain you may not be familiar with, farro. Farro looks like rice uncooked and quinoa afterward.

Caludio Girodano: "Farro is a Latin word that comes from the Roman times. It was their main staple."

And since Mare Mio’s all about fresh local seafood, it’s served over octopus. But it goes with almost anything.

Claudio Girodano: "It’s like pasta, you can mix it with anything you want."

It’s high in protein too…

Claudio Girodano: "How do you think the Roman Empire was built? It was built on farro."

Could be your secret weapon, so clean your plate and don’t be late. Only two training days before the big race Sunday morning.

Just to eat all those carbs, I’d be willing to actually run the marathon!