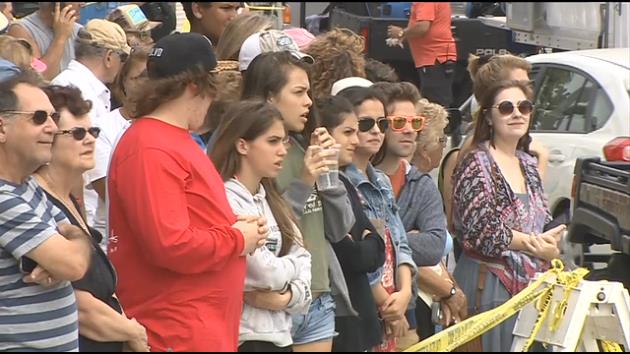 Hot bodies glistening in the sun… two of our favorite hunks did just that today in SoFlo. Zac Efron and Dwayne "The Rock" Johnson are shooting the "Baywatch" movie. Deco’s Vanessa Medina spent the day lurking around the set to get a glimpse.

Fans in Deerfield Beach gathered to see "The Rock," Zac Efron and Ilfenesh Hadera, among others, as production crews begin filming a cinematic adaptation of "Baywatch."

Johnson could be seen waving at fans at Deerfield Beach.

Johnson will be starring in the film, an adaptation of the 1989 television series of the same name. He will be portraying Mitch Buchannon, a character formerly played by David Hasselhoff.

Doreen Torres: "He’s adorable. He’s so handsome, and we watch wrestling, so we want to see him back in the wrestling ring, but we’ll watch him today."

Zac Efron, who plays Matt Brody, also had a variety of fans come out to see him.

Christina Casey: "We’re here for Zac, but it’s pretty cool to see The Rock too,"

Hadera, who will play Johnson’s love interest, could also be seen on the set. Other actresses, like Kelly Rohrbach, who will portray C.J. Parker, were not on set Tuesday.

Rick Abraham: "This is something to see. You don’t see this everyday."

Allison Silverstone: "This is pretty great, and a lot of people are out, it’s awesome."

Filming at Deerfield Beach is expected to finish by Thursday.