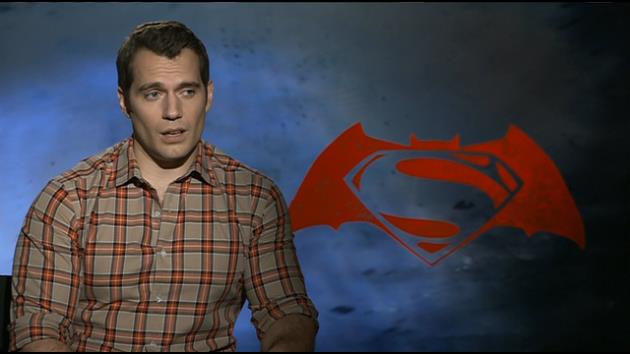 For the life of us we can’t figure out why they can’t get along. They both look great in tights. In one week, Batman and Superman will face off in "Dawn of Justice." Deco’s Chris Van Vliet flew to Los Angeles to size up the competition.

This is like Ali vs. Foreman. Brady vs. Manning. Zoolander vs. Hansel! Next Friday, we will find out who will reign supreme! But first, why are Batman and Superman so mad at each other?

"Batman v Superman" picks up with the devastation from the end of "Man of Steel." It turns out Bruce Wayne owned an office building in Metropolis and wants Superman to be held accountable for destroying the city and putting innocent people in harm’s way.

Ben Affleck takes on the role of Batman for the first time and takes it in a new direction.

Chris Van Vliet: "What would you say is different about this Batman?"

Ben Affleck: "This is a little older, he’s a little more world-weary. He’s been around the block once or twice so he’s a little wiser, but he’s definitely more cynical and more darker and more jaded."

In this movie, not everyone thinks Superman is a hero.

Chris Van Vliet: "On the surface, people look at this title and go ‘Batman v Superman?’ Batman has no chance."

Henry Cavill: "In an all-out fight, Batman has no chance."

Chris Van Vliet: "But he has some tricks up his sleeve?"

Henry Cavill: "There’s a lot of tricks going on. Poor Supes gets it from every side in this movie, and yeah, it’s not so simple."

The biggest question surrounding this movie is, if they’re fighting each other, is Batman the bad guy or is Superman? The answer is neither. It’s Lex Luthor, played by Jesse Eisenberg, who is working them both from different angles.

Jesse Eisenberg: "Lex Luthor looks at the destruction that Superman can do and says, ‘We need to destroy this guy. We can’t allow this guy to roam free. It’s like letting a nuclear weapon on the loose.’"

The epic showdown hits theaters on March 25th. And there are a lot of spoilers online right now … like, that one scene where Justin Bieber teams up with Supes is pretty incredible.