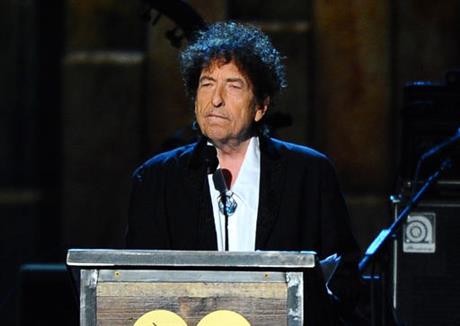 COPENHAGEN, Denmark (AP) — Bob Dylan won’t be coming to Stockholm to pick up his 2016 Nobel Prize for literature at the Dec. 10 prize ceremony.

The Swedish Academy said Wednesday that Dylan told them “he wishes he could receive the prize personally, but other commitments make it unfortunately impossible.”

The 75-year-old American singer-songwriter was awarded the prize on Oct. 13 “for having created new poetic expressions within the great American song tradition.”

The literature prize and five other Nobel Prizes will be officially conferred upon winners in Stockholm next month on the anniversary of award founder Alfred Nobel’s death in 1896.

Details about who would accept the award on Dylan’s behalf were unclear — more information on that was expected Friday.

Permanent Secretary Sara Danius told Swedish news agency TT the academy received “a personal letter” from Dylan and that he “underlined that he feels extremely honored by the Nobel Prize.”

The Academy said it “respects Bob Dylan’s decision,” adding that not travelling to the Swedish capital to personally pick up the prestigious award was “unusual, but not exceptional.”

“The award is still theirs, as it now belongs to Bob Dylan,” the Academy said. “We are looking forward to Bob Dylan’s Nobel lecture, which he must hold, according to the requirements, within six months” from Dec. 10.

Dylan at first was silent after the Nobel announcement but eventually said getting the award left him “speechless.”

Dylan has accepted numerous awards over the years, including the Presidential Medal of Freedom, which he picked up at a White House ceremony in 2012. A year later, he became the first rock star voted into the elite American Academy of Arts and Letters, which made him an honorary member.

In 2000, Dylan traveled to Stockholm to collect the Polar Music Prize from Sweden’s King Carl XVI Gustaf.
——
This version corrects the spelling of Bob in the 7th paragraph.