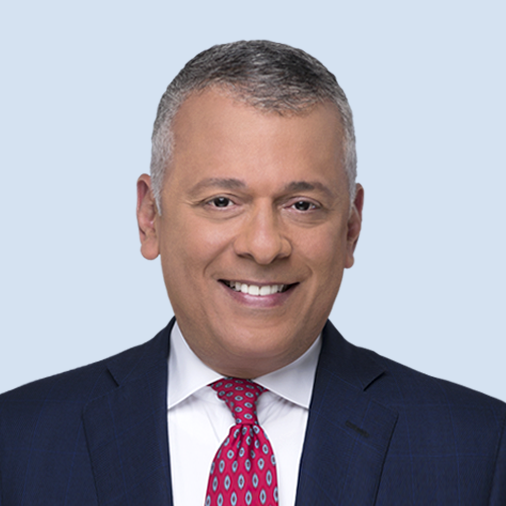 NATAS Silver Circle recipient and Emmy Award winner Craig Stevens co-anchors 7NEWS at 5, 6, 10, and 11pm weeknights with Belkys Nerey. He has been in television news for more than 25-years, the bulk of that time spent in South Florida.

At 7NEWS, Stevens has reported a wide range of stories: several hurricanes beginning with “Andrew,” the Oklahoma City bombing, elections from the local level to national races, including the disputed 2000 Presidential Election from Austin, Texas. He spent weeks following the murder of fashion designer Gianni Versace and the manhunt for Andrew Cunanan, Pope John Paul II’s visits to Cuba and the United States, the death of JFK, Jr., the Elian Gonzalez saga, and Fidel Castro’s visit to the United Nations. In 2015 he reported from Cuba the flag-raising at the U-S Embassy in Havana and the visit of Pope Francis.

Craig has also anchored 7NEWS coverage of such major events as Jean-Bertrand Aristide’s return to Haiti, the crash of “Valujet” flight 592, the deadly shootdown of two “Brothers to the Rescue” planes, the September 11th attacks, the launch of the wars in Afghanistan and Iraq, Castro’s transfer of power to his brother, President Obama’s 2016 state visit to Havana. Recently he anchored several consecutive hours of coverage of Castro’s death and in 2018 the deadly mass shooting at Marjory Stoneman Douglas High School in Parkland.

Stevens began his career in 1987 in the mailroom at NBC NEWS in Washington. By election night 1988, while still a sophomore in college, he was working full-time in the NBC newsroom as an assignment desk assistant. Eventually, he worked on such programs as “NBC Nightly News with Tom Brokaw,” “Today,” and “Meet the Press” as a production assistant.

Beginning in 1990, he spent two years as a reporter and substitute anchor at WBBH-TV, the NBC affiliate in Fort Myers, before joining WSVN in 1992. Stevens left us for a brief stint in 1997, to anchor weekend news at our Boston sister-station, NBC affiliate WHDH, though during that time, much of his work there, was featured here. He returned to WSVN in 1999, anchored weekends and the 5:30 and 6:30 newscasts, before assuming his current duties in May 2001.

Craig is active in a number of charities and organizations. He spent several years as vice-president of the Suncoast Chapter of the National Academy of Television Arts and Sciences where he also chaired a committee that mentored young TV professionals throughout the southeastern United States.

Stevens spends a good deal of time working with future broadcast journalists. In 2009, he joined the adjunct faculty at Barry University where he teaches a news writing course in the Department of Communication. In addition, he began teaching at the University of Miami’s School of Communication in 2014.

He has received several honors for his work. In 2018, Craig was part of the team awarded a Suncoast Regional Emmy for coverage of Hurricane Irma. In 2017, he won *three* Emmy statues — part of the team recognized for coverage of Fidel Castro’s death and a deadly shooting at the Fort Lauderdale/Hollywood International Airport. He was also recognized for “spot news” coverage of a potentially dangerous chase on a South Florida highway. In 2016 he was awarded an Emmy for his role in the team coverage of a tornado in Broward County. The Suncoast Chapter of the National Academy of Television Arts & Sciences in 2014 awarded Craig the prestigious “Silver Circle” award, for his years of devoted service to the television industry in the Sunshine State. In 2009, he was among those named by the University of Miami as a “Communicator of the Year.” In September 2005, “Florida Monthly” magazine named Craig “Best Local TV News Anchor”. The Broward/Palm Beach “New Times” awarded Stevens with the same distinction in 2003. The city of Miami Beach awarded him a key to the city in 2006, recognizing his charitable efforts.

In 2016, Stevens launched WSVN’s effort to improve relations between law enforcement agencies and the communities they serve. He hosted the “Hope and Healing” town hall meeting featuring members of Congress, state and local leaders, and members of the law enforcement community. The “Hope and Healing” segment now appears regularly on 7News broadcasts.

He is a native of Falmouth, Massachusetts on Cape Cod, and, in 1990, graduated The American University in Washington, D.C. with a major in Communication/Print Journalism and a minor in History.

Craig lives in Miami with his black lab Parker.